On Thursday April 27, the occupation forces handed notices to some farmers in Wadi Qana [Valley of Qana] that informed them the military would cut more than 1000 trees.

Wadi Qana is located close to Deir Istiya in Salfit district and one of the spots of the West Bank that is first ethnically cleansed from its Palestinian population and then its nature devasted by the Israeli settlement project. 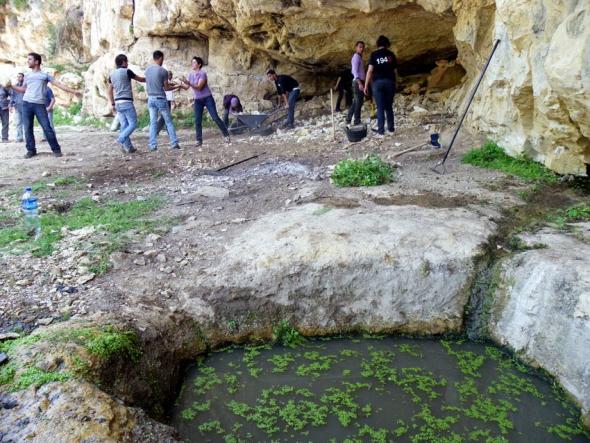 The valley was once famous for its lush nature, its water resources including eleven springs and fertile agricultural lands.  It spans some ten thousand dunum of lands, planted predominantly with citrus trees. Before the occupation, the springs in Wadi Qana served as the main water resource for agricultural, animal and human needs in the area.

Today Wadi Qana is to be completely isolated by the Wall and is surrounded by 9 settlements with a total population of over ten thousand settlers. Most of its springs are unusable because of the pollution caused by the untreated waste and sewage water that are dumped into the lands and the waters from these settlements.  (See in the image youth volunteers reclaiming one of the springs in Wadi Qana.)

Until 1986, around 350 people used to live in the valley. Most of them were forced to leave and live now in the nearbby village of Deir Istiya. The ruins of their houses are still visible beneath the Karnei Shomron settlement. Through home demolitions and other military orders and harassment, people were pushed out of the valley.

With the current orders for the cutting of trees, the Israeli occupation destroys more of what is still remaining from the valley.