In Palestine, signs of 3rd INTIFADA, Stop the Wall report

Palestinians inside 1948 occupied Palestine are uniting with the people in the West Bank and Gaza to protest the killing of the martyr of Jerusalem. This show of unity during the funeral for Muhammad Abu Khudeir frustrates the Israeli attempts to separate Palestinian through a myriad of juridical, legal and physical obstacles, including the Wall and the colonies. 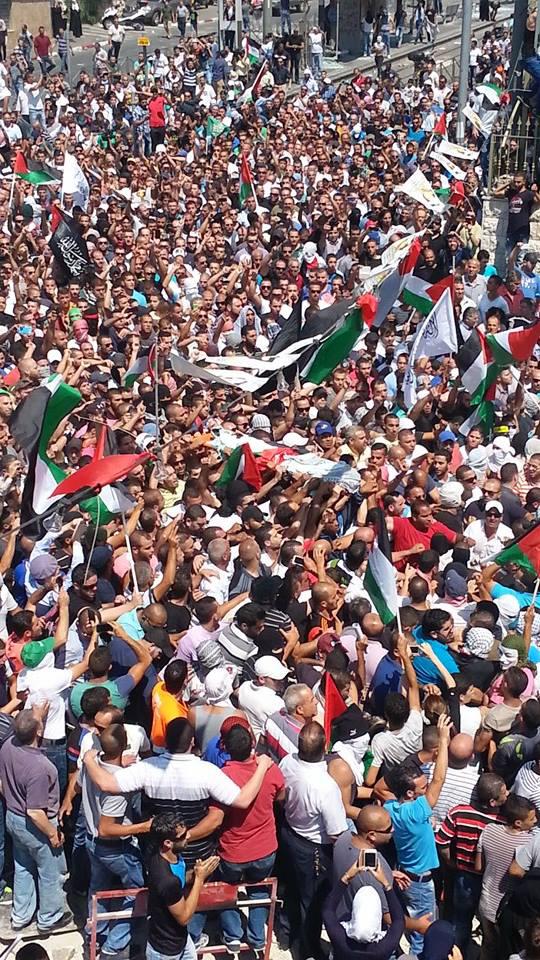 700 arrests and 13 deaths after the "disappearance" of three settlers

After the occupation army announced the disappearance of three settlers near Hebron in the West Bank on 13 6 2014, and before finding their dead bodies, two weeks after the incident, the Israeli army invaded the West Bank and imposed policies of collective punishment against the Palestinian people. Hebron city was particularly affected. The Israeli military sealed the city's entrances and prevented people from traveling in or out of Hebron.

All across the West Bank, the Israeli army attacked ordinary people, broke into homes and demolished them. They also began a mass arrest campaign; more than 700 Palestinians, including deputies in the Legislative Council and a number of former prisoners, who were freed in the last prisoner exchange were arrested. 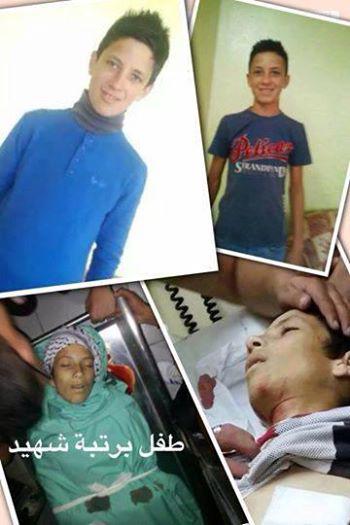 Occupation forces have killed 13 Palestinians in the same period in the West Bank and Gaza:

The child Ali Abdel-Latif Alaawor (7 years), from Gaza, who died on 14/06/2014 of wounds caused by the bombing of the Israeli occupation; the child was hit in the head as a result of the raid that targeted his uncle who was riding on the same motorcycle.

Ahmed Arafat Al Saberen (23 years), from Jalazoun camp, who died on 06/16/2014; the occupation army shot and killed him with a bullet in the chest after clashes erupted in the camp. Ahmad had been detained in Israeli jails and was released for less than a month before the day of his death.

The child Mohammed Jihad Dodeen (13 years), from Hebron, who died on 20/6/2014 shot by Israeli soldiers after the occupation forces attacked Dura. Mohammad was shot in the chest; he was taken to the Hebron governmental hospital, and died later in the hospital.

Sakher Dergham Abu Mohsen (16 years), from Tubas, who died of injures from a land mine that occupation forces planted, while he was tending sheep near Samra Camp in Wadi al-Maleh in the northern Jordan Valley, where there are many occupation military installations in the area. Israeli soldiers carried him inside the military camp when he was still alive and then told his family about his death due to deep and direct injuries.

Ahmed Saeed Saud Khalid Fahmawi "Ahmed Abu Chino" (30 years), from Ein Nablus camp, who died after suffering from bullets by the Israeli occupation forces that attacked the camp when he was on his way to morning prayers in Omar Al Mukhtar Mosque; he was left bleeding for more than an hour because occupation forces prevented ambulances from reaching the place. 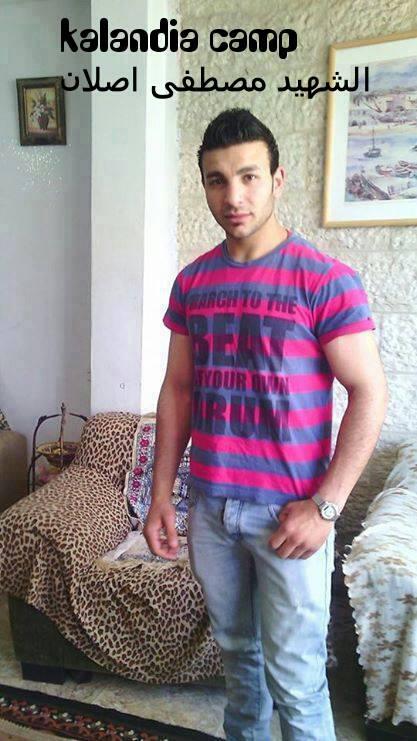 The two Palestinians who died on 6/27/2014, Osama Al_husoma (29 years old) from Beit Lahiya, and Muhammad Fasih (24 years) from the Sheikh Radwan neighbourhood, were killed in a raid by an Israeli aircraft on a civilian vehicle in the beach camp west of Gaza City.

Mohamed Zayed Obeid (26 years), from Gaza Strip, who died on 29/06/2014, after Israeli occupation forces shot several shells towards the houses and lands east of Qarara east of Khan Younis in the southern Gaza Strip.

Jamil Ali Al Soof (60 years), from Salfit village; he died of a heart attack during a fight with Israeli soldiers who tried to break into his house and search it.

Fatima Ismail Rushdi (63 years), from Aroub refugee camp in Hebron, she died on 26/06/2014 as a result of a heart attack after Israeli army broke into her house in the very early hours of dawn that day. She was detained by the occupation forces for several hours in her house, which prevented her family from taking her to the hospital. 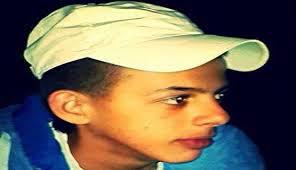 The occupation government hasn't revealed any evidence that verifies the circumstances surrounding the  disappearance and killing of the three settlers. Yet, as part of the ongoing settler attacks carried out under the protection of the Israeli state, a gang on Israeli youth tortured and murdered Mohammad Abo Khdair, 16 years old, from Shoafat neighbourhood in occupied Jerusalem. While on his way to dawn prayer they kidnapped him, carried him away in a car and then burned him alive. Muhammad died of burns in 90% of his body, according to autopsy medical report. The report further stated the the existence of ashes in his lungs, which proves that he inhaled the fume of his burning body while he was still alive.

Mohammad's body was escorted by thousands in one of the largest funeral that Jerusalem has ever seen, it was attended by more than 10,000 people. His body was like a flame of anger that turned the funeral into a powerful demonstration, igniting protests that lasted for 3 days and expanded from Shuafat to many West Bank cities and cities within the Green Line. 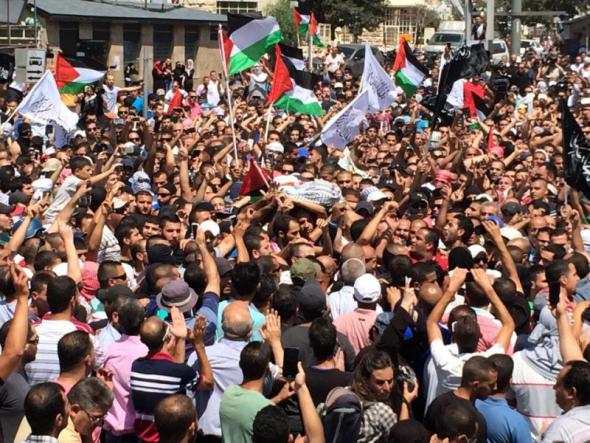 During these demonstrations, the Israeli forces arrested and brutally beat many Palestinians. This included Mohammad's cousin, Tarek, a 16 years old, who was attacked and beaten harshly before he was arrested. This kind of policies awaken stark memories of the so-called Israeli policies of 'broken bones' implemented against Palestinian protesters during the first Intifada. Israeli soldiers would break the arms of Palestinians to punish them for throwing stones. 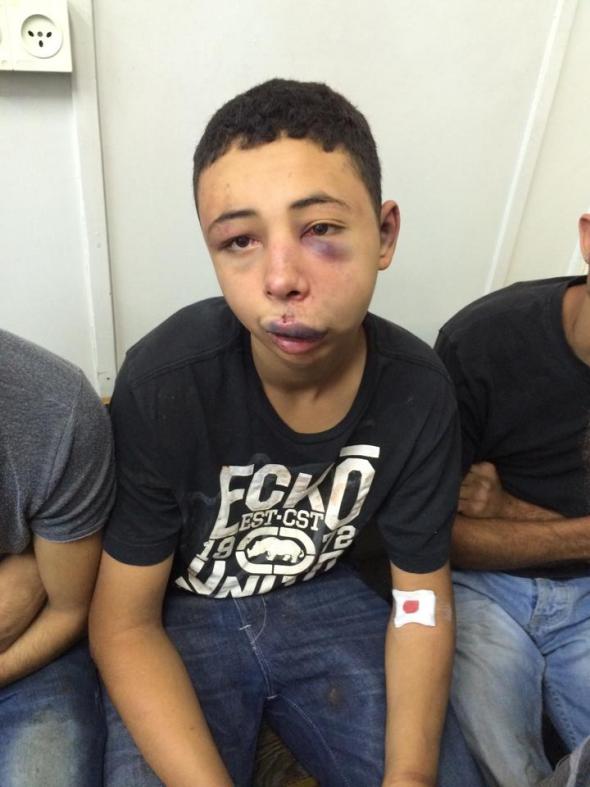 The escalation in settler crimes and the murder of Mohammed Abu Khudair, were followed by several cases of abduction of Palestinian children, attempts to break into villages, and different violent attacks by settlers, which were reported throughout the occupied West Bank, in Jerusalem and inside the Green Line. 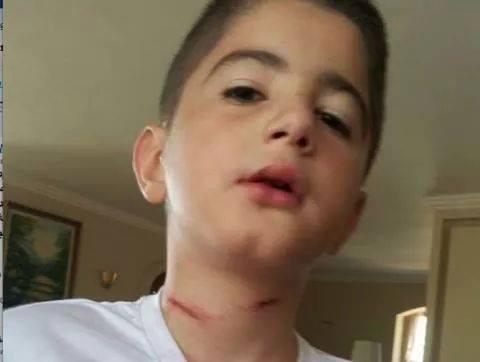 Therefore, Palestinians called for the formation of popular committees in the villages to counter violent raids by settlers and the occupation army. Palestinian resistance across the Green Line shocked leaders in the Israeli army and police. In reaction to the ongoing attacks on their children and their very existance, Palestinian citizens of Israel organized angry demonstrations raising the Palestinian flags and decorating the entrances of their villages and towns with Palestinian flags.

Locations and details of the clashes

The number of detainees from inside the 1948 occupied Palestine increased yesterday to 57 detainees (as of Sunday morning) including more than 10 minors; 22 of them in the area of ââNazareth, 15 in Umm al-Fahm and 25 in an area called the 'Triangle' in the south. It is clear from the published details that Palestinian protests have widely increased and led to the closure of a number of main streets.

In the Israeli government hearing today, Netanyahu commented on the events of the weekend in Jerusalem and the villages of the “triangle”, threatening: "We have worked vigorously over the weekend against the demonstrations in the city of Jerusalem and Arab villages, we will strike hard at anyone, from whatever party, which tries to break the law or incite the public" Danny Danon, the Deputy Minister of the occupation army, attacked demonstrators inside the Green Line,  protesting against the murder of Mohammed Abu Khudair, and demanded the state to deal with them as terrorists who must be punished.

Israeli police said in a statement that it will send the detainees to the court today, to consider the extension of their detention, noting that it intends to make more arrests.

Israeli police explained in a statement that it had arrested 11 young Palestinians during Sunday at dawn during clashes that took place in the cities of Nazareth, Umm El Fahem, the village of Ein Mahel neighboring Nazareth town and Al Baqa Al Ghrbueh town in the Western Triangle.

Israeli border guards said that it arrested two young Palestinians from Nazareth and four other from Ein Mahel,  on suspicion of throwing stones during clashes with police forces. Police also said that they arrested three young Palestinians from Umm al-Fahm on suspicion of disturbance during the clashes, they also arrested five other young men at the crossroads in Baqa Al Gharbieh town in Street No. 6.

Clashes continued yesterday evening in Baqa Al Gharbieh, for nearly five hours which ended at three in the morning; Israeli police threw very strong tear gas during the demonstration on the demonstrators, where they burned  the Israeli flag at the northern entrance, and hung Palestinian flags at the entrance to the city.

Yesterday evening,  clashes erupted in Nazareth city between protesters, occupation's police forces, and Israeli special forces, after the crowds started a demonstration in Al Ein area in Nazareth and went to the "Tunnel" Crossroad through Tawfiq Zyyad street, the demonstrators blocked the main street near the "Tunnel", where the police were quick to launch tear gas and sound bombs. 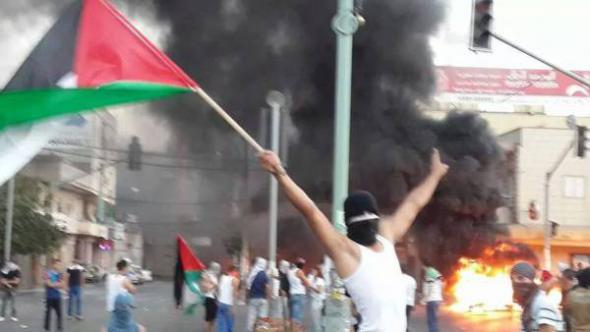 In “Ara valley, in the Naqab/Negev, police fired tear gas and sound bombs to disperse a large demonstration that was organized at the entrance of the village, to protest  the incitement against Palestinians, the bloody campaign of arrests and the heinous crime against Abu Khudair.

In “Ara valley region, Israeli police announced yesterday the closure of the main road that passes near Qulonswa, Al Taybah, and Al Tira. Also Al Tira market was closed for Jewish buyers, they also closed the street number "5614", which connects Qulonswa and "Hmstlah" crossroad, with the exception of residents of the area.

A report from the Israeli occupation police said that stones were thrown towards Israeli vehicles in street number 65 in Um Al Fahem region and, according to Israeli police, an Israeli women was injured by the stones that broke the glass of her vehicle. She was transferred to "Haemek" hospital in Afula for treatment. 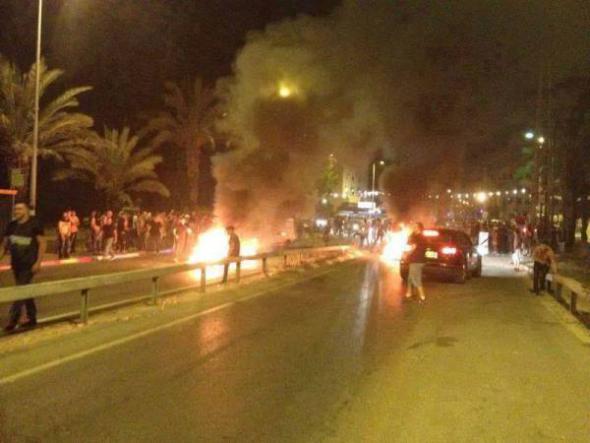 The police claimed that they had found 'evidence', and that the evidence confirm that some Molotov cocktails were thrown near the Jewish-Israeli residential area Me Ami near Umm Al-Fahm without causing material damage or casualties.

Angry young Palestinians closed street No. 4 near the Farm Crossroad south of Naharya, using burned rubber tires, so police forced the closure of the street until the fires were put out.

Angry clashes also broke out in Kfar Qare and Kafr Manda, during which demonstrators raised the Palestinian flag and burned tires.

Clashes erupted yesterday between Palestinians and Israeli police forces in the Old City of Jerusalem, where Palestinians threw stones and fired crackers towards Israeli police. Police fired tear gas and sound bombs to disperse them.

Police said that about 200 young Palestinians were involved in clashes with troops in the village of Shufat in Jerusalem and that the troops violently dispersed the demonstrators.

Newspaper reports said that dozens of Israelis rushed into the neighborhood of Beit Safafa in the south of occupied Jerusalem and threw stones at Palestinians who fought them back, as Israeli police forces rushed to the place. Palestinian young men placed a barricade at the entrance of "Nof Tsov" settlement in Ramallah area.

In the Old City of Jerusalem, before dawn today, a settler fired a round of bullets from his weapon.

On Saturday evening Haifa Magistrate's Court extended the detention of 11 detainees who were arrested in demonstrations, that took place yesterday and today in the city of Umm al-Fahm, until tomorrow morning.

A crew of volunteer lawyers represented them. They have been charged with different accusations, like disturbance of public order and partcipation in illegal demonstrations, also some of them were accused of assaulting a police officer.

The demonstrations in Umm al-Fahm lasted until late into the evening, when the occupation forces used sound bombs, tear gas, and pumped waste water to disperse the demonstrators. And also demonstrations began in Bethlehem, Abu Dis, Al Ram and at Qalandiya checkpoint north of Jerusalem.