7 7 2014, Israeli forces arrested more than 50 Palestinians during the demonstrations that started in the towns inside the Green Line.
These demonstrations came as a rejection of occupation's crimes against Palestinian people, and the most recent crime which is burning the child Mohammed Abu Khudair,16-year-old, alive in occupied Jerusalem.
Clashes erupted in Nazareth, Jaffa, Kafr Kana, Araba, Ableen, Al Taybah, Baqa al-Gharbia, Al Tira, Shafa Amro, Sakhnin and the Negev.
Israeli police carried out raid and search operations in many Arab towns and villages, since Monday. They arrested young men and minors against the backdrop of the ongoing demonstrations for the third day in a row.
Local sources said that the number of people arrested in the protests in the occupied land since 1948, since the protests first started reached about 277 detainees, 110 of them were arrested last Sunday night during the clashes, raids and inspections, including 30 children.

On Monday, Israeli police arrested Raja Aghbarieh, the leader of Abnaa El Balad movement, against the backdrop of demonstrations in Umm al-Fahm, after breaking-into his house and searching it.
The clashes began from the entrance of Tamra town, when occupation forces attacked a demonstration against incitement and the crimes of Israeli occupation.  Occupation army fired sound bombs at demonstrators and arrested 14 young men.
In Nazareth, confrontation began at evening, when people started a protest during which Israeli forces intervened and arrested 11 young people at least, and then confrontations intensified and lasted until midnight.
Hundreds of people from Araba, and Deir Hanna participated in a demonstration in the streets of the occupied triangle; as hundreds also demonstrated at the crossroad of Ableen village and clashed with Israeli forces who tried to suppress the demonstration by firing tear gas.
Al Tayba witnessed fierce confrontations between demonstrators and Israeli forces who used waste water to disperse them, and arrested some of them.
Clashes erupted in Jaffa Road that leads to Nazareth, and Israeli forces arrested a number of young demonstrators.
Clashes broke out again in Shafa Amro city, between Palestinians and undercover forces, when these forces tried to run over protesters.
Palestinians also demonstrated at the entrance of Kafr Kana, against occupations' crimes, and incitement against Palestinians inside the Green Line. 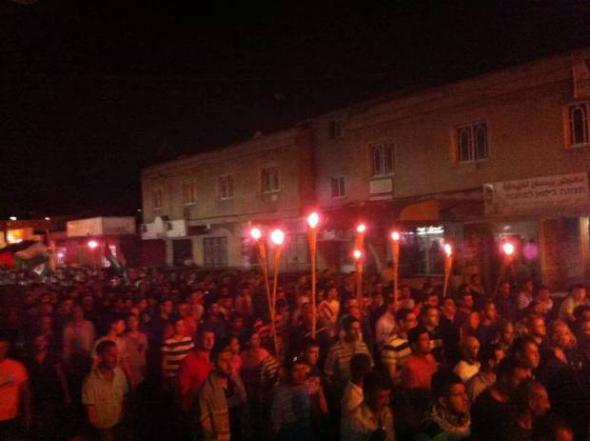 Israeli forces arrested 12 young Palestinians in Hura, Lakiya, Tel Sheva and Arara after clashes broke out in these places between the demonstrators and police forces.
In this context, Israeli civilians attacked a Palestinian child while trying to enter his family's house in Yafa, while a number of young men prevented them from continuing the attack.

Protesters closed the main street of Baqa al-Gharbiya and burned tires; where violent clashes broke out between them and the occupation forces.

Occupation forces arrested more than 8 Palestinians during protests in Tayba city. Israeli police threatened that it will arrest more of the people who participated in the protests.

Also hundreds of young men demonstrated in Fureidis, and Jisr Al Zarqa towns; they raised slogans condemning the crime against Abu Khudair. They also set fire to garbage containers and tires, but no arrests or injuries were reported.

Some young Palestinians burned tires in the street that leads to to Kafr Misr village, near the entrance of Ein Door Kibbutz in Jezreel Valley area. The protest happened around midnight and soon after firefighters arrived and put out the fire.

A member of the Land and Housing Defense Committee in Ara town said that this tense atmosphere and protests lasted until after midnight and he expected that tomorrow protests will continue until the evening.
Observers also predicted that on Monday clashes will continue to be organized by the Palestinian citizens of Israel in different towns and villages and that they will continue as long as Israel continues and expands its aggression on Gaza and the West Bank.