Early Monday morning, August 17, the Israeli military with its bulldozers stormed the area of Bir Uona archeological site, west of Beit Jala in Bethlehem governorate, and razed 25-30 dunums of land and uprooted about 45 olive trees, some of the hundreds of years old. Join the Solidarity Tent set up to challenge the land destruction is perpetrated in order to continue construction of the Apartheid Wall on the land of Cremisan Valley.

The popular committee in Beit Jala together with the Stop the Wall Campaign, the Popular Struggle Coordinating Committee and the Palestinian National Forces mobilized to protest this land grab and destruction of property. As the people gathered in the land clashes broke out and one of the residents of Beit Jala was so badly beaten by the military that he suffered from heart failure, lost conscience and is since yesterday in the hospital for treatment.

People have built a solidarity tent on the land and are organizing every day since the early morning hours public events and protests. International activists are asked to join the mobilizations.

The section of the Apartheid Wall in the Cremisan Valley would, if completed as planned, isolate some 3500 dunums of land from its Palestinian owners. This would affect most of the families resident in Beit Jala and annex instead those lands to the expansion area of Gilo settlement.

The people in Beit Jala and the Monsastry of Cremisan, located in the area, are since years in a joint battle against the Apartheid Wall through popular protests and mobilization, international solidarity efforts as well as within the Israeli legal system. Lately the European Union and a number of national episcopal congregations have expressed their opposition to Israel’s decision to continue building the Wall. 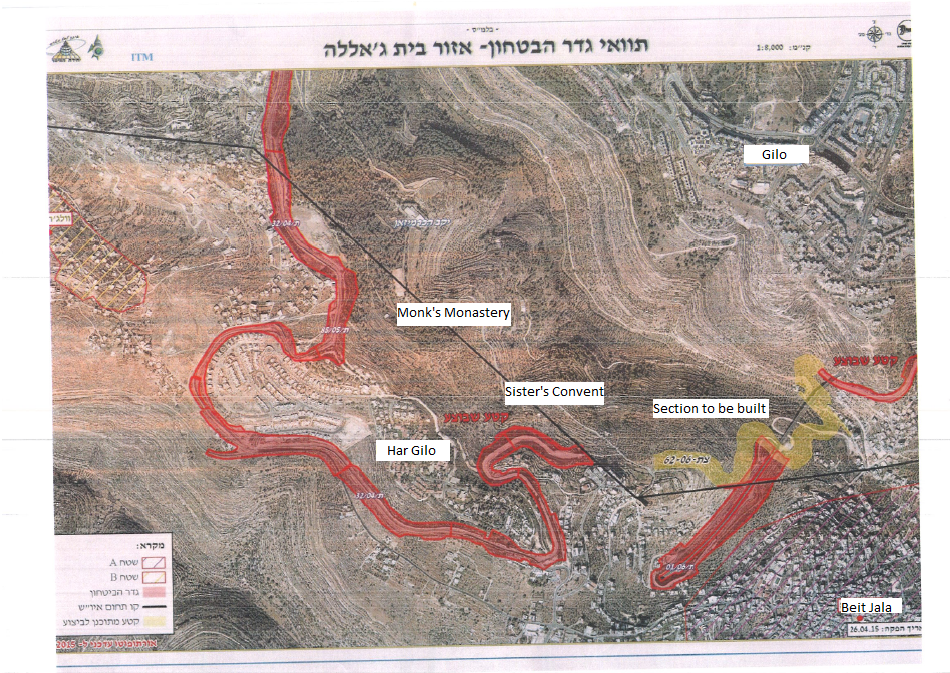 However, the people had little time to celebrate the news that would have given them at least some time before the next onslaught of Israeli bulldozers against their land and livelihoods. On July 6, the Israeli Supreme Court overruled the Israeli High Court. The Supreme Court ruling applies the need to re-route the Wall only as far as the lands surroundings of the Salesian Sister’s Convents and the Salesian Monk’s Monastery as well as the monasteries’ agricultural lands are concerned. The court ruled that the Israeli authorities can initiate building the Wall on the privately owned lands by people from Beit Jala; thereby leaving-out only a small section, hundreds of meters in width and adjacent to the Salesian monasteries and their lands.

This is yet another show of the fact that within the framework of the Israeli apartheid regime, the legal system’s main task is to legalize the confiscation and colonization of Palestinian land and the repression and ethnic cleansing of the Palestinian people for their land. It is yet another attempt of a 'divide and rule' tactic in order to weaken PAlestinian resistance.

We are therefore calling on the European Union, the international community, including the Vatican to go beyond their statements of concern and condemnations but to put real pressure on Israel to stop the construction of the Apartheid Wall, dismantle the Wall and the settlements and to respect international law and human rights.

We are calling on people across the globe to hold Israel and the multinational corporations that contribute to and benefit from Israel’s criminal policies against the Palestinian people.