As every year, BDS France protested Elbit System’s presence at France’s biggest military exhibition. The action took place by the Elbit Systems stall on Saturday 24, June, during the Paris Air Show. Elbit Systems is one of the main profiteers from Israel’s apartheid Wall and wars against the Palestinian people and exports this expertise around the globe – including for the construction of the US Wall of Shame against the Mexican people.

BDS activists along with members of the collective: “Les Désobeissants” (the disobedient) staged a die-in and protest against the Israeli company Elbit Systems at the premises of the air show, right in front of Elbit’s expo stall.

Elbit Systems is built on the expertise of the Israeli Ministry of Defense Research Institute and has profited greatly from supplying the Israeli military with a variety of equipment used to sustain Israeli occupation and ethnic cleansing of the Palestinian people. It produces the drones used in the attacks and massacres against Gaza and Lebanon and provides equipment for the Israeli Merkava tanks. The Israeli Apartheid Wall, which is crippling Palestinian communities by isolating them in walled-in ghettos, has provided a massive source of revenue for Elbit. The company is a symbol for the Israeli economy, which essentially thrives on and fuels war, repression and control in Palestine and around the globe. Over a dozen financial institutions have already withdrawn their support for Elbit Systems. 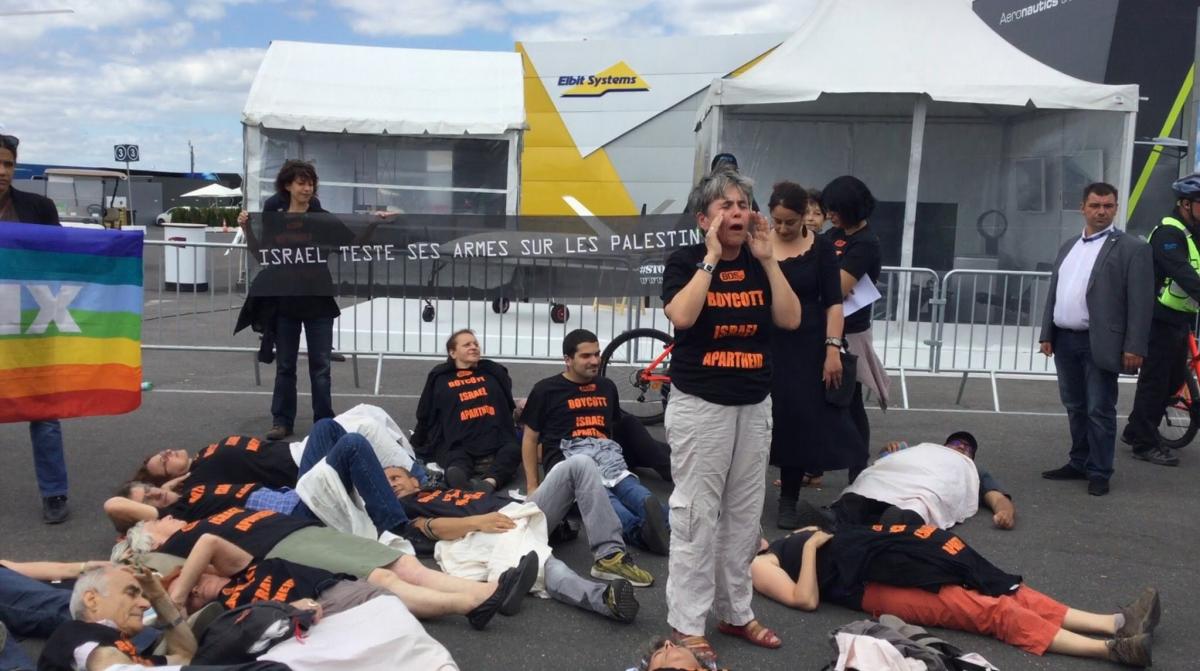 While heavily armed security guards eventually pushed the activists from the premises, the solidarity action was encouraged and followed with sympathy by the many people present on the scene. For BDS France, Israeli arms companies (Elbit Systems, Raphael …) are guilty of war crimes and must be tried and sentenced by the International Criminal Court. Annick Coupé of ATTAC said during the action: “In France, civil society is mobilizing in response to the call by Palestinian civil society. The association ATTAC is a movement dedicated to solidarity, justice and international law: as such, the association has taken a stand in favor of the BDS Campaign in support of the fundamental rights of the Palestinian people. This is the meaning of our presence in this action.” Verveine Angeli, from the union Solidaires added: “We are here as trade unionists in solidarity with the workers and the population in Palestine who can not live and work under the constraint of the Israeli occupation.” Jean Guy Greilsamer of the French Jewish Union for Peace: “The Palestinian people launched the BDS movement to end the colonial, apartheid and ethnic cleansing policy practiced by Israel on behalf of Jews around the world. More and more Jews are participating in the BDS Campaign, which will continue until Israel complies with international law.”

This action follows another protest on April 26, when activists from BDS France gathered in front of the Palais des Congrès in Paris, where the transnational ensurance and investment giant AXA held its Annual General Meeting.

BDS France distributed a leaflet to the attention of AXA shareholders to inform them about AXA’s investment, through its subsidiary, in the Israeli military company ELBIT Systems as well as AXA’s link with Israeli settlements.