On Saturday afternoon, for the third time in the last weeks, masses poured on the streets of Ramallah to demand from the Palestinian Authority (PA) to immediately end their own sanctions on Gaza that compound the horrific Israeli siege. The police brutality last week has not weakened the resolve of the people – more people came out on the street with more resolve and PA forces trying to make amends.

Far over 2000 people – young, old, families, intellectuals, activists – from all walks of life once again gathered with their handmade placards and Palestinian flags in the centre of Ramallah this Saturday afternoon.

Click below to see a video of the protest: 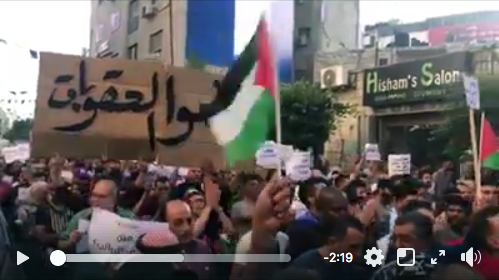 The beatings, arrests, tear gas and other police brutality meted out last week against a similar protest had predictably only grown the anger and the determination of the people to ensure the PA would begin enacting policies that defend the rights of the people and support Palestinians in struggle, starting from an immediate end of the blockade of salaries to Gaza and payments for electricity for Gaza.

Over the last week instead, the PA has clearly received and understood at least one message: You do not repress your own people. This time, PA forces even handed out water to the protestors.

“Used to 70 years of Israeli apartheid, clearly PA police repression won’t stop people’s protests. It is good to see the PA has realised that it cannot fight its own people in the streets. Now it is time to understand that it cannot oppress them by withholding essential funds because of narrow political interests – whether in Gaza or anywhere else!

“The Palestine we struggle for is a place free of Israeli occupation and apartheid, democratic and thriving every day to implement the rights and demands of the people – nothing more and nothing less.”

This protest was already preceded by a protest in Bethlehem the day before, Friday June 22.

Another protest in Ramallah is already planned for June 29 – until the demands of the people are met.