10 days to the Second Global Day of InterAction for a #WorldwithoutWalls! As the countdown starts and movements and organizations across the world are preparing to join in, Stop the Wall releases a first list of planned activities. It's an inspiring coming together of diverse actions united by the determination to build effective solidarity and joint struggles to challenge the walls that oppress, exploit, exclude, discriminate and kill.

Once again, people and movements across the globe are making it clear: We are many, we are everywhere and we are building a #WorldwithoutWalls. Together we are standing against a world where Israel has become a model for a rising right that increasingly deploys its paradigms, methodology and technology tested in decades of occupation and apartheid.

The Palestinian grassroots Anti-Apartheid Wall Campaign will be mobilizing together with other organizations and movements:

Mobilization starts already during the World Social Forum on Migration, Mexico City, November 2-4, with a number of activities aimed at promoting a #WorldwithoutWalls. Among those are: 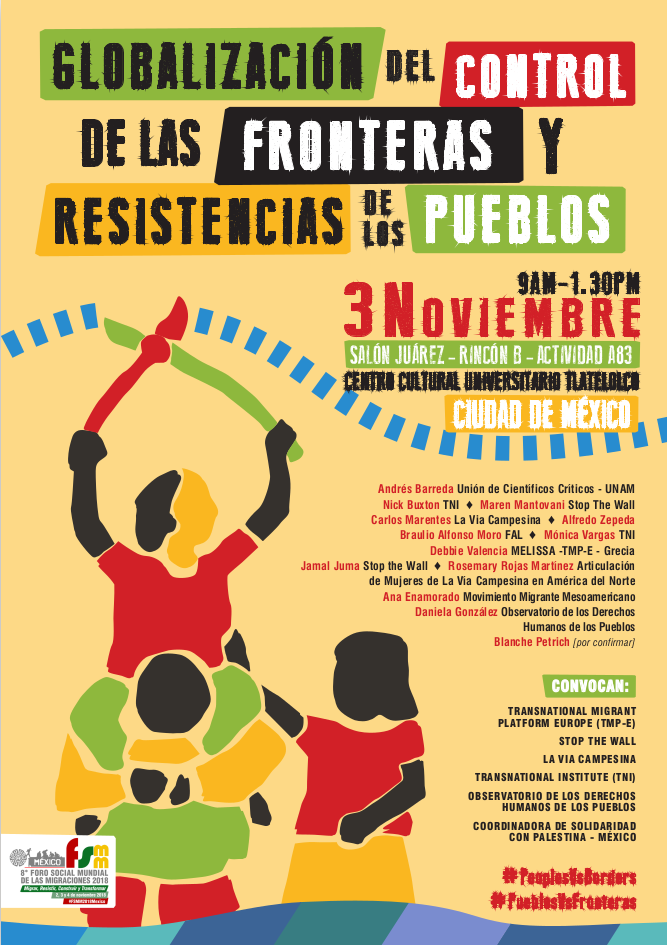 Events with Stop the Wall from November 5-9:

The Argentinian Committee in Solidarity with the Palestinian People and BDS Argentina will be organizing an arts festival with the title World without Walls and will launch a cultural boycott initiative. 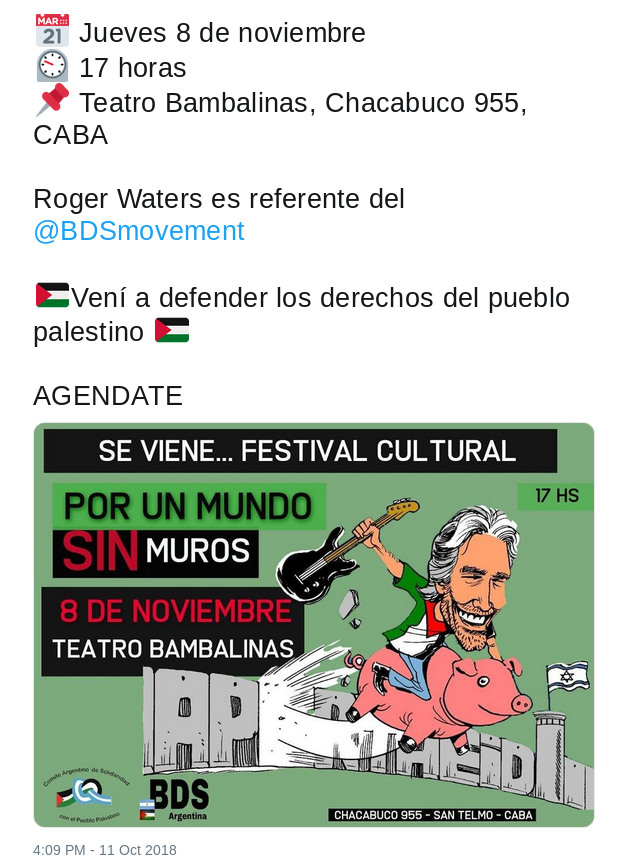 Women in Black (Vienna) will join in with an online information action, publishing translated texts on #WorldwithoutWalls.

Tadamon and the student Palestine group at the University of Quebec in Montreal SDHPP UQAM will be organizing on November 9 a visibility action and social media blitz campaign.

Chilean organizations will be joining in with social media action. 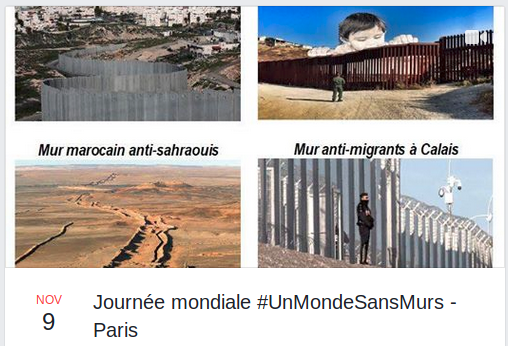 BDS Berlin will participate with:

A conference at the Central University of Jamia Millia Islamia will be organized to mark the Global Day of InterAction #WorldwithoutWalls.

BDS Malaysia, MyCare, the al-Quds Foundation Malaysia and the Palestine Students Association – Malaysia have come together to participate in the global InterAction with: 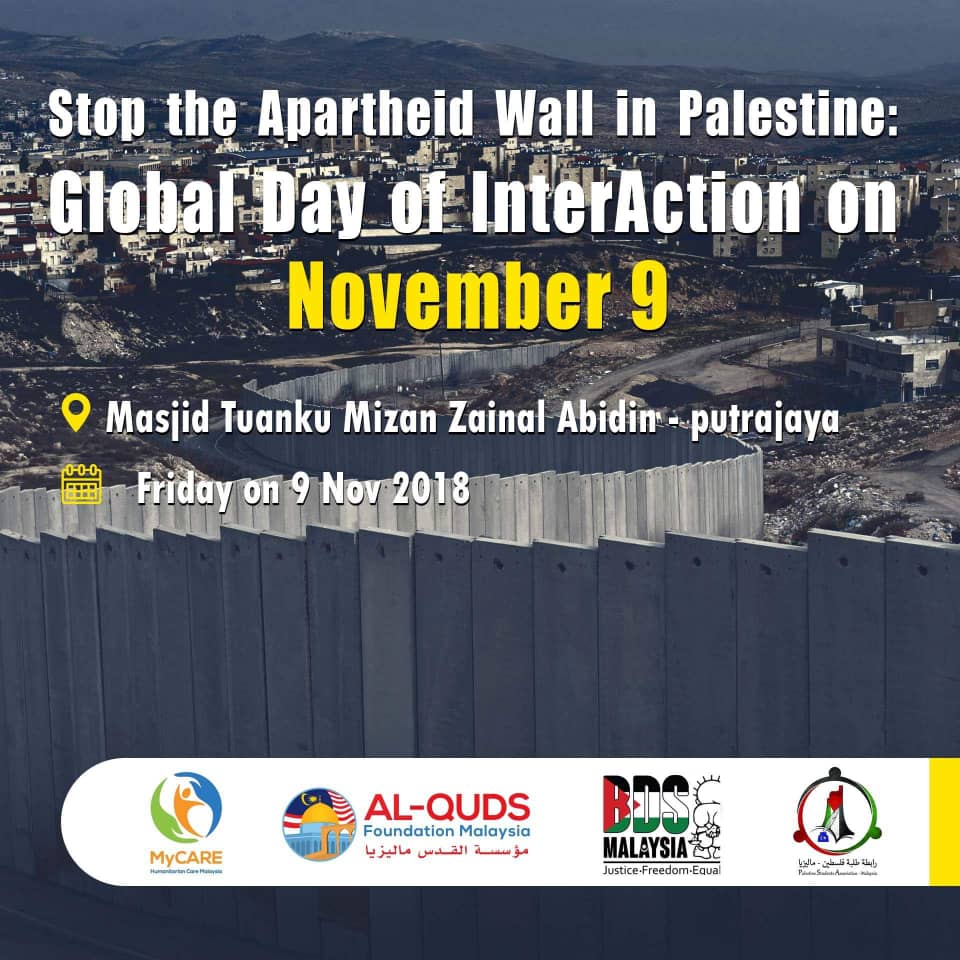 PSC THailand will join in with social media action. 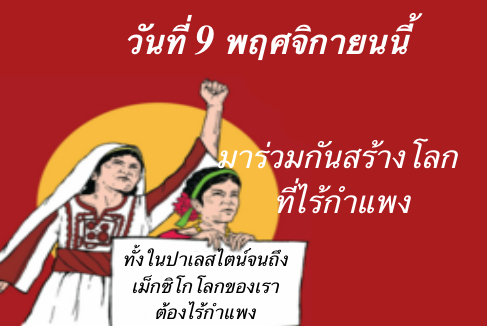 November 5: The Deadly Exchange campaign of the Jewish Voice for Peace (JVP) will organize on November a conversation with the Palestinian grassroots organization, Stop the Wall, and the Human Rights Observatory of Indigenous People, on the connections between militarization on the Mexico-US border and the ongoing occupation of Palestine.

November 7: A large World Without Walls Coalition organizes in Oakland a public event entitled 'Investing in Sanctuary: Freedom to Stay, Freedom to Move, Freedom to Return'. 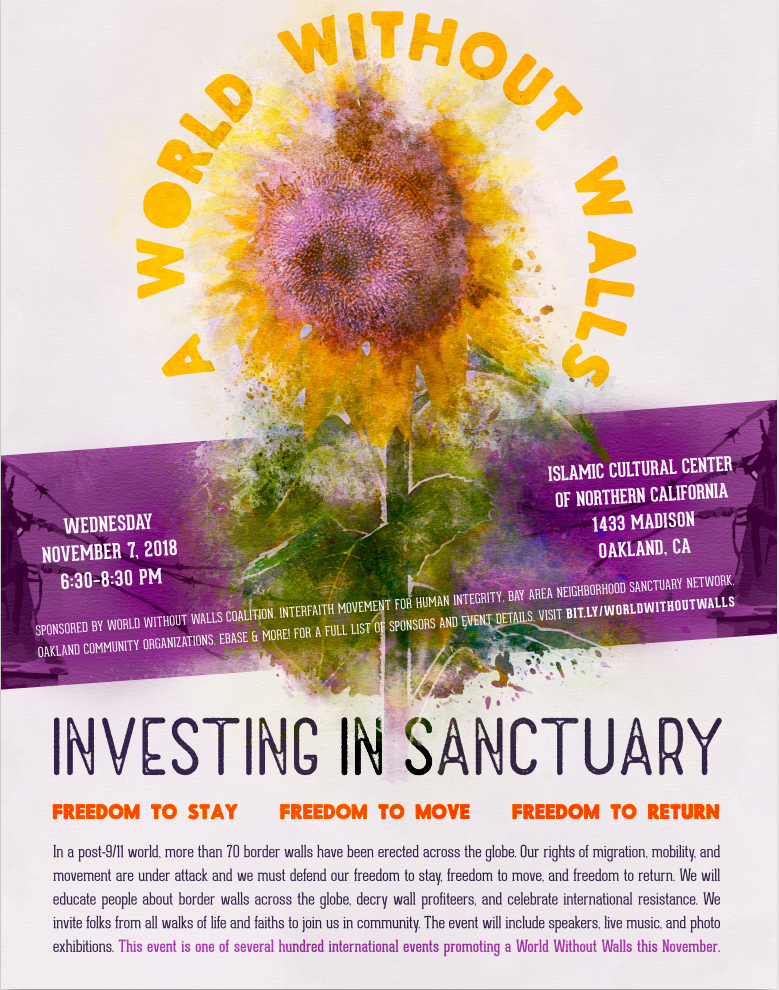 November 9: The US Campaign for Palestinian Rights will be joining with social media action.

Please let us know what you are planning at global[@]stopthewall.org. You have already done so and still not on the list? Apologies, we might have missed the mail! Please, remind us.

Want to join in? There is still time! Have a look at our suggestions on how to join the mobilization for a #WorldwithoutWalls.

Organize seminars, conferences or other events that talk about Israel’s apartheid Wall and the Walls in our societies and borders. You may want to invite speakers that connect Palestine solidarity and other struggles against the myriad of ever more killing and repressive walls that harm far too many lives and livelihoods.

Organize an exhibit with photographs of the Wall(s) or other visual testimonies.

You may want to stage a performance with a mock wall, distribute leaflets, have a stall in a central place or organize a full scale protest targeting one of the Wall-builders, whether a corporation profiting from the Walls or those institutions taking the decision to build a wall.