Stop the Wall invites activists, academics and all those affected by walls: physical and ideological walls that divide us, to contribute to a collection of essays, short papers and other written or visual contributions discussing and building the quest for a World Without Walls. Please find the details and information on how to contribute here.

In 2017, Palestinian and Mexican movements issued a joint call for a #WorldwithoutWalls. The call for a Global Day of InterAction on November 9 has since been endorsed by over 370 organizations, movements and networks across the globe.

The basic common understanding that has given the impetus to the initiative has been expressed in the 2017 call: “From Israel’s apartheid Wall on Palestinian land to the US Wall of Shame on indigenous land at the border with Mexico – Walls are monuments of expulsion, exclusion, oppression, discrimination and exploitation.”

Since 2002, when Israel started building its apartheid Wall in the occupied West Bank, walls have quadrupled across the globe and are a dramatically growing reality in our lives. Over 70 walls across the globe are militarizing borders or imposing territorial control over occupied land. We are witness to this growing fortification, from the already existing US Wall at Mexico’s border to India’s increasingly more militarized walls, from Morocco’s wall in the Western Sahara to walls that have reached southern Africa. Europe today has built over 1000 km of physical walls, six times the length of the Berlin walls.

In addition to these physical walls, ‘virtual walls’ are being imposed world over. Instead of cement, iron slabs or dirt mounts, a maze of electronic sensors, surveillance towers, drones and border guards militarize and seal off borders. Nancy Pelosi, speaker of the United States House of Representatives, recently proposed such a ‘technological wall’ while the European Union is increasing research and development for border security and surveillance technology, strengthening militarized maritime operations and building a 10000 strong standing army targeting migrants. These walls kill, marginalize, expel and in whatever form they come – they bring enormous suffering to those that are the target of these walls.

Walls have become normalized and are even put forwards as electoral campaign promises. More than the essence itself, it seems to be the form that these walls should take that divides the far-right from the liberals.

Walls have not only risen to fortify borders of state control but demarcate the boundaries between the rich and powerful and the ‘other’, those inside the system and those excluded from it. Israel’s walls cutting off Palestinian neighbourhoods and cities from each other have first been adapted for US warfare in Baghdad and then contributed to a new military urbanism over the last two decades. Such walls further develop the logic of ‘gated communities’ and see in the global south their most striking examples. Favela movements in Rio de Janeiro rightly recognize in the walls around their slums the Palestinian experience.

Walls are defining elements and symbols in a broader global power dynamic.

Since a long time, academic research has been analysing the increase of walls. Among many others, Stephen Graham points at contemporary walls as elements of war while they are a central feature in what Achille Mbembe defined as intensifying necropolitics. Aneta Ikonomova in her analysis traces the walls back to the enclosures of common land in Britain of the 18th century while Gilberto Conde looks at walls as a form of colonial and neo-colonial tool to define the frontier against the ‘non-modern’. Mohammad A. Chaichian argues that walls throughout history are a signal of the fading power of an empire.

The apparent paradox that in an increasingly globalized world, ever more walls are rising has stimulated many studies. Stéphane Rosiére and Reece Jones argue that we are facing an era of ‘Teichopolitics’ – the politics of walls – where walls symbolise the emergence of a privileged few who actually live the promise of globalisation and defend their privileges. Wendy Brown argues that today’s walls are a reaction and result of ‘waning sovereignty’ and the havoc waged over large populations by neoliberal globalization.

Movements around the globe are struggling daily against the walls and have developed their own analysis of these walls and vision on how to fight them. Many have shared their struggle and experiences during the Global Days of InterActions for a #WorldwithoutWalls. Some experiences have come together during the workshop “Globalization of Border Control and People’s Resistance” during the World Social Forum on Migration in 2018.

Whether in the streets or in academia, the different and often differing analyses and visions regarding walls are held together by a common denominator: Israel plays a crucial role within the global wall building endeavors. When it started the construction of its Wall in 2002, it was met by the international community with disbelief and has drawn global condemnation. Since then the world has ushered into an era of walls. Israel has found ways and allies to normalize walls and their related regime of exclusion, oppression and dispossession. This is evidently within the framework of a world where supremacist and racist politics are gaining ground as tools to perpetuate colonial, neoliberal, racial, gender and many more injustices. Israel is today a role model for most of the political forces of the rising far right.

Israel’s leading role in the development of walls allows its corporations and institutions to reap growing profits from selling methodologies and technologies across continents. Despite Israel’s relatively small economy, among the 15 leading global economic players in the sector, three are Israeli corporations and virtually all of the major border security companies have technological cooperation with the Israeli security and military sector.

Under the call for a #WorldwithoutWalls, people and movements have been coming together, organizing actions and events since 2017. Now is the time to bring together the analysis of the structures and interconnections within this World of Walls and experiences of struggles from across the continents so that we can strengthen collective efforts and refine local and global strategies that help us build a #WorldwithoutWalls. 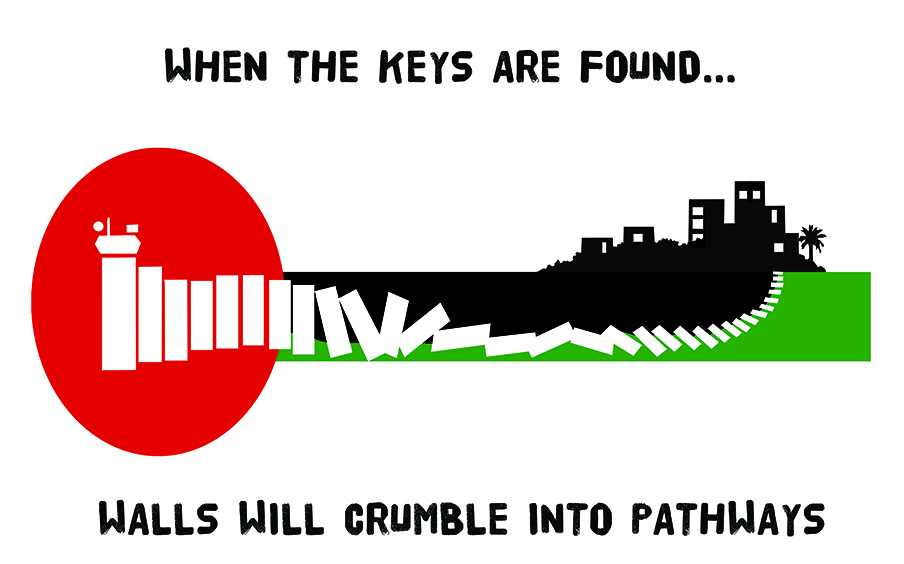 30 years after the fall of the Berlin Wall, we are collecting contributions from different perspectives that address the questions that have come up during the last two years of mobilizations and conversations:

Who is invited to contribute

We are inviting academics and activists who have a particular expertise regarding the subject and struggle to contribute to the collection. We invite you to share your individual and collective experiences.

We are inviting contributions from all continents.

We are not expecting contributors to be experts on the Palestinian issue in particular but to place themselves within the broader struggle for a World without Walls.

What kind of contributions are encouraged

We are inviting contributors to join with essays or other forms of written contributions, including interviews or declarations, that help to build a collective analysis and vision.

We are also inviting contributors to share with us photos, graphics or art around the struggle for a World without Walls.

Contributions need to be sent to global@stopthewall.org.

You can submit your contribution in English or Spanish.

We will publish all contributions online. Selected contributions will be edited in a special online and print collection and published initially in English and Spanish, and later in Arabic.

The contributions that will be part of the online and print collection will be edited and translated and sent for final review to the authors.