Tens of armed Israeli soldiers raided the home of Mahmoud Nawajaa, the General Coordinator of the Palestinian BDS National Committee (BNC), Palestine’s largest civil society coalition on  Thursday, July 30ths. They arrested Mahmoud one day before the Al-Adha Eid celebrations. On Al-Adha Eid Day, Ruba Elaian, Mahmoud’s wife, expressed her sorrow at the absence of Mahmoud stating: “On the eve of Eid Al-Adha, the Israeli occupation forces raided our home, which we settled in only two weeks ago. We have not yet finished arranging our furniture, and our children’s games, nor our dreams. It is not strange for them to violate the sanctuaries of safe houses and intimidate Palestinians without the right to do so and without the slightest sense of humanity.

At around 3:30 AM on Thursday, July 30th, tens of heavily armed Israeli soldiers raided the house of the General Coordinator of the BNC, Mahmoud Nawajaa, 34, and arrested him. Mahmoud is a prominent Palestinian human rights defender who has been a vocal advocate for Palestinians’ rights and an opponent of Israeli apartheid regime in Palestine and across the world.

The detention of Mahmoud one day before the Eid Al-Adha celebrations, a major religious and family occasion for Muslims in Palestine and across the world, has resulted in deep sorrow for Mahmoud’s wife, Ruba Elaien, his three children, Amro, Aws and Ahmad and other family members. On Eid Al-Adha Day, Ruba expressed her grief at the absence of Mahmoud:

We were expecting to celebrate the Eid Al-Adha in our new house, the house that we have been dreaming about since years. We built that house together and chose its smallest details to be the warmest place on earth to embrace our small family. Yet, in the hottest nights of the summer, our house has turned into the coldest and most brutal place.

On the eve of Eid Al-Adha, the Israeli occupation forces raided our home, which we settled in only two weeks ago. We have not yet finished arranging our furniture, and our children’s games, nor our dreams. It is not strange for them to violate the sanctuaries of safe houses and intimidate Palestinians without the right to do so and without the slightest sense of humanity.

At 3:00 am there were sounds outside. Then, we suddenly got surprised when Israeli soldiers broke the door and the lock with a lever to break through the house without even asking for permission!!!

They took my husband Mahmoud after handcuffing his hands behind his back and blindfolding him while carrying with them our personal computers and mobile phones. Then, they left.

They left as if nothing had happened. They came heavily armed to detain him and went out, leaving behind fear, terror, crying children and broken hearts on a joyless festival without the father of the house.

Today is the first day of Eid Al-Adha. We were supposed to wake up to the voices of Amro and Aws quarreling with each other, the singing of Ahmad and daddy Mahmoud’s voice yelling from the living room, “let’s go to Yatta, boys.” But this did not happen.

At this time today, I should have been ready in my new home waiting for my family’s visit for the first time after settling in the house. But that did not happen either.

A lot of things have not happened, but Mahmoud will be free soon, God willing. Mahmoud will return and we will make each day a joyful festival. 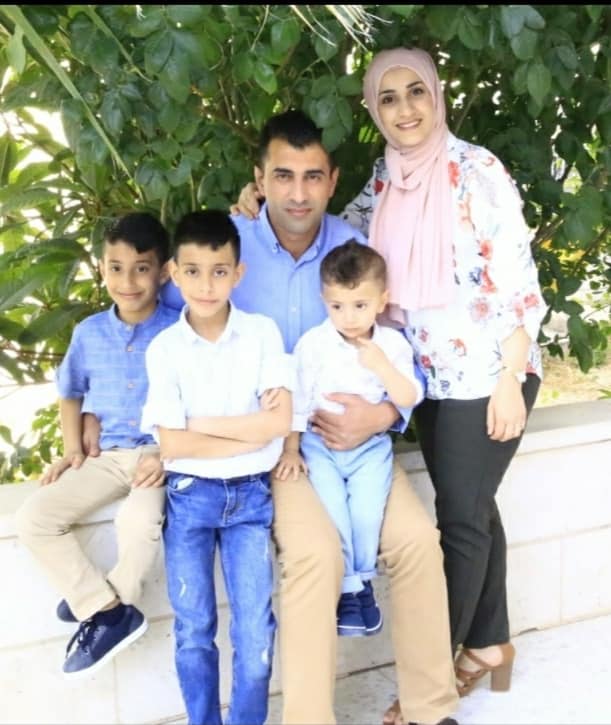 For Mahmoud’s children, yesterday, the day when families gather and celebrate the Eid Al-Adha, was nothing like any previous Eid celebrations. Ruba said that “although I tried to make my children enjoy the Eid Al-Adha by buying them new clothes, they all felt that there was something missing.” She added that “they kept saying to me “if our father was here now, he would have taken us on a tour around Yatta, his hometown south of Hebron, as he usually does.”

Since the arrest of Mahmoud, the Israeli occupation authorities deny him the right to meet his lawyer. He is so far detained without any charges against him. In yet another clear violation of international law, which prohibits the transfer of prisoners outside the occupied territory, the Israeli authorities are holding Mahmoud in Jalameh, a high-security interrogation center outside the occupied West Bank.

Being detained during the coronavirus pandemic in an Israeli jail doesn’t only mean a heightened risk to Mahmoud’s health. Israel uses the pandemic to bar his family or observers to his hearings – the only moment he can have contact with the outside world.

The detention of Mahmoud comes as a part of Israeli apartheid regime’s escalated violence and arrest campaign against Palestinians to stifle any resistance to the intensified home demolition, land confiscation and the looming de jure annexation of large swathes of the West Bank. As the impact of the BDS movement is growing worldwide, Israel is ramping up its efforts to stifle the efforts of the non-violent movement mobilizing global action to end complicity with Israeli apartheid and settler colonial practices against Palestinians. According to a statement released by the BDS National Committee to condemn the arrest of Mahmoud and call for international action to release him, “Israel’s far-right government has been fighting the BDS movement for years, recognizing its strategic impact and allocating massive financial and human resources in its “war” against it.” Growing repression is always as well a sign of the growing force of a movement fighting for justice.

Several organizations around the world have denounced the arrest of Mahmoud considering it as an onslaught on the BDS movement as a form of non-violent resistance to Israel’s three-tiered system of oppression:  settler colonialism, apartheid and occupation. In its appeal calling on the Israeli occupation authorities to immediately and unconditionally release Mahmoud, Front Line Defenders, states that “Front Line Defenders is deeply concerned about the arbitrary arrest of human rights defender Mahmoud Nawajaa and believes that his arrest is a result of his peaceful and legitimate human rights work.” CODEPINK, Ireland Palestine Solidarity Campaign, BDS Colombia, BDS India, the Irish Congress for Trade Unions, and several others also condemned the detention of Mahmoud and called for his release.

Commenting on this, Ruba stated that “Mahmoud is a human rights defender well-known for his advocacy for Palestinians’ rights internationally. It is hardly surprising, then, that activists and organizations globally are standing by Mahmoud and demanding his release.” Her message to the activists and human rights organizations worldwide is “never to stop the #FreeMahmoud Campaign and to increase the pressure on states parliaments to call for the release of Mahmoud.”

The BNC calls on all organizations and people of conscience to:

1. Write to government’s foreign office/ministry and ask them to urgently:

– Publicly condemn Israel for its arrest of Palestinian human rights defenders, like Nawajaa, and demand Israel’s respect of their right to operate freely.

3. Raise awareness on social media, use the hashtags, #FreeMahmoud, #LibertadParaMahmoud.

4. Strengthen BDS campaigns and planned actions countering Israel’s annexation plans, and include the demand to #FreeMahmoud and to end Israel’s attempts to silence Human Rights Defenders.