On July 26th, Palestinians reiterated their solidarity with and support to the residents of the favelas who are plagued with police brutality and discrimination by holding a webinar as a part of the Black July events held annually in Rio de Janeiro, Brazil. The webinar endeavored to approximate the different, yet universal experiences of the people residing in the favelas and the Palestinian people. Strengthening bridges of solidarity between Palestine and the favelas aims to combat oppressive structures of apartheid, militarization, colonialism, settler-colonialism, hetero-patriarchy, capitalism and neo-liberalism, which all deprive Palestinians, residents in the favelas, indigenous and black people of their basic human rights, be it education, housing, healthcare, security, and many others. The Black July events are a space to decry the validation and exaltation of exclusionary practices of oppressive and apartheid regimes.

Black July is a series of events that are organized by the favela movements in Rio de Janeiro, Brazil.  This year, Black July was in its fifth annual iteration. Black July is a space to counter racism, discrimination, and apartheid and to emphasize on the internationalist nature of the combat against all oppressive regimes across the globe. Palestinians’ annual participation in Black July, with this year through a webinar due to the spread of COVID-19 pandemic is a show of solidarity with our sisters and brothers languishing in shanty houses in the overcrowded favelas in Brazil.

To emphasize and reiterate the mutual solidarity between Palestinians and the people of the favelas, we invited two speakers from Brazil: Fransergio Goulart and Gizele Martins and a speaker from Palestine, Jamal Juma’. Fransergio Goulart is an activist in the favela movement and organizer of the events taking place in Rio de Janeiro. He introduced Palestinian youth who attended the webinar to Black July events, purpose of the events, the situation in the favelas and international involvement in the annual events. Gizele Martins is a journalist, resident of Maré favela in Rio de Janeiro, and one of the event’s organizers who visited Palestine in 2017. The webinar was a space for Gizele to share her reflections on her visit to Palestine, the similarities between Israel’s apartheid practices against Palestinians and the genocidal practices of the Brazilian state against the black people and favelas residents. Jamal Juma’, a prominent popular activist from Palestine and the General Coordinator of the Stop the Wall Campaign, on the other hand, shared with the audience his experience when he visited   one of the favelas in Brazil for the 2018 Black July as well as experiences in encounters in South Africa and Brazil with movements fighting oppression, dispossession and exclusion. Jamal also asserted the importance of building and strengthening bridges of mutual solidarity with indigenous, marginalized and black peoples living in the periphery bringing the World without Walls Campaign as an example. 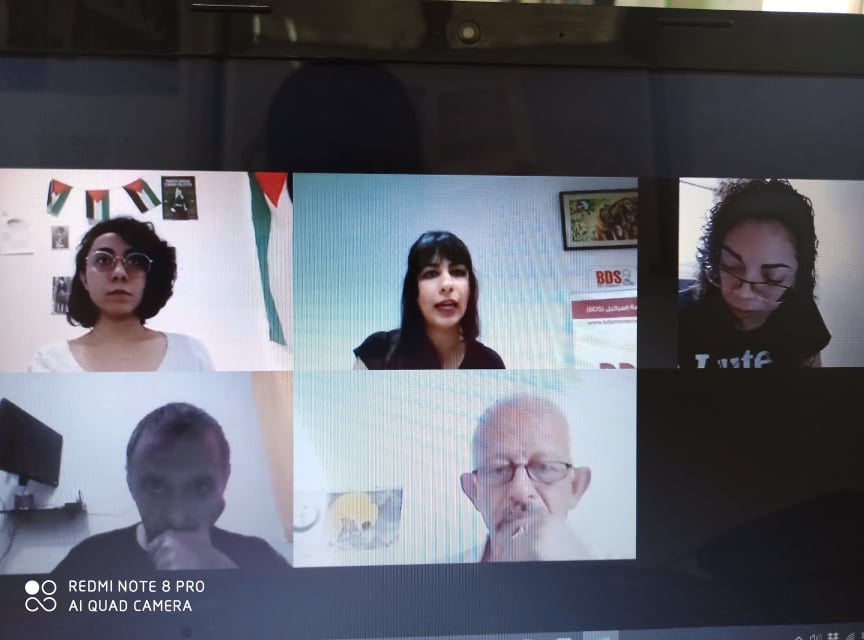 Palestinians and the residents of the favelas struggle against the same global matrix of intersectional oppressions. For the people of the favelas, Fransergio pointed out, “July 26th, the first day of the black July events is important as it is the anniversary of the massacre of Acarí. 30 years ago, on July 26 1990, Brazil’s military police came to Acarí, one of Rio de Janeiro’s favelas and kidnapped 11 youth, 7 of them minors, that disappeared forever. We have chosen this date to start the Black July events to remember what happened.” Fransergio also stated that part of the purpose of Black July is “to remind our people to never stop the struggle for freedom and justice.” For this reason, he added, “we have to remember those who suffered from the Brazilian police brutality.”

For Palestinians, Jamal resonates with Fransergio commenting that “it is important to remind ourselves of those who suffered and the catastrophes that had led us to our current situation of an entrenched Israeli apartheid regime.” Jamal went on to say, “On May, 1948Israel was created on the wreckage of my people’s houses. On June, 1967, Israel occupied the remainder of Palestine and started building its illegal settlements and a more solidified apartheid and ghettoization structures.”

As Israeli apartheid oppression is an integral part of interlocking global politico-economic systems of white supremacy and racism, it shares with such systems the same subjugating and dehumanizing techniques of murder, mass imprisonment, discrimination, and ghettoization. To emphasize how the two oppressive systems export ideologies and practices of discrimination, violence and exclusion to each other, Gizele argued that “the discrimination wielded by both the Brazilian government against us in the favelas and Israel against Palestinians is part of a global capitalist system to marginalize and silence people.” Recalling her visit to Palestine, Gizele commented:

The most noticeable similarity between the plight of Palestinians and the people of the favelas was the apartheid system the two suppressive regimes impose-The Brazilian government and Israeli apartheid regime. In Palestine I saw the Apartheid Wall and military jeeps everywhere as manifestations of Israel’s apartheid. This is similar to the favelas. In both Palestine and the favelas, the two oppressive regimes use violence against the racially oppressed peoples, including the arrest of children. Like some places in Palestine, the favelas lack electricity and water, which they need the most during the pandemic.  The only difference is that the imposed practices of the Israeli apartheid regime are more suppressive and violent.

The structural brutality of the two oppressive regimes as noticed by Gizele, Jamal argued, “is being solidified and justified through a constant process of demonization and vilification of Palestinians, black people and indigenous people.” He added that “the mainstream media plays a major role in demonizing and dehumanizing the peoples the oppressive regimes seek to subjugate and dominate.”

Fransergio affirmed that the Brazilian government has wedded its interests to Israel’s apartheid regime and militarism even more by allowing Israel to implement projects of different kinds in Brazil. The most remarkable of which is Israel’s export of militarization ideology, training, services and surveillance techniques to the Brazilian police to chase, intimidate and shoot-to-kill human rights defenders and people in the favelas. Brazil is one of the biggest clients of the Israeli Security Company, International Security and Defense Systems (ISDS). ISDS is deeply rooted in Israel’s ongoing war crimes and the solidification of Israeli apartheid practices against the Palestinian people. It markets its weapons and other services as ‘field-tested’ on Palestinians.

The similarities addressed by the three speakers throughout the webinar show how Palestinians and the favelas’ residents’ struggles for self-determination and justice are inextricably bound efforts. Like Palestine, the people living in the favelas are besieged in one way or another through violence in policing, state sanctioned oppression, brutal murder, arbitrary arrest, surveillance systems, walls and in other aspects of life. The familiarity of fighting, Gizele intimately stated, “makes defending the rights of Palestinians the same as defending the rights of both the indigenous and black people in Brazil.” She added that “the struggle of both peoples is continuous, and so is the mutual solidarity.”

As part of the efforts to internationalize marginalized people’s struggles across the world and reinforce mutual solidarity among them, Jamal brought to the fore the centrality of the World without Walls Campaign (WWW) in seeking to unite different peoples against the proliferation of walls globally. WWW was launched in 2017 by Stop the Wall and indigenous movements in Mexico as a response to the construction of the US wall of shame on indigenous lands in Mexico. Today, there are over 70 walls across the world symbolizing how our world controlled by imperialism, capitalism, neoliberalism and hetero-patriarchy substitute justice, freedom and equality for walls of exclusion, discrimination, otherness and exploitation. 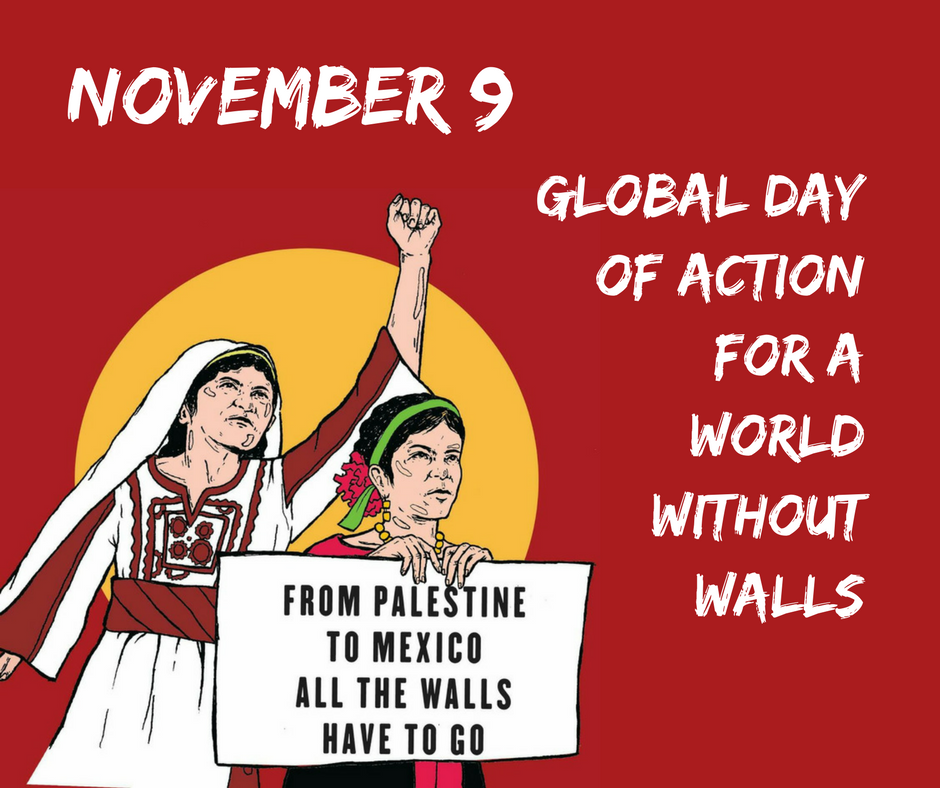 However, in hard and gloomy times, mutual solidarity and linkages between oppressed peoples thrive and grow even more. For this reason, WWW released an online exhibition titled “Walls in Times of Pandemic.” The exhibit includes contributions of many movements, including the favela movement, sharing peoples’ suffering from the spread of the pandemic and the increasing walls of suppression. Its aim is to strengthen the networks with people and their aspirations that build a #WorldwithoutWalls.