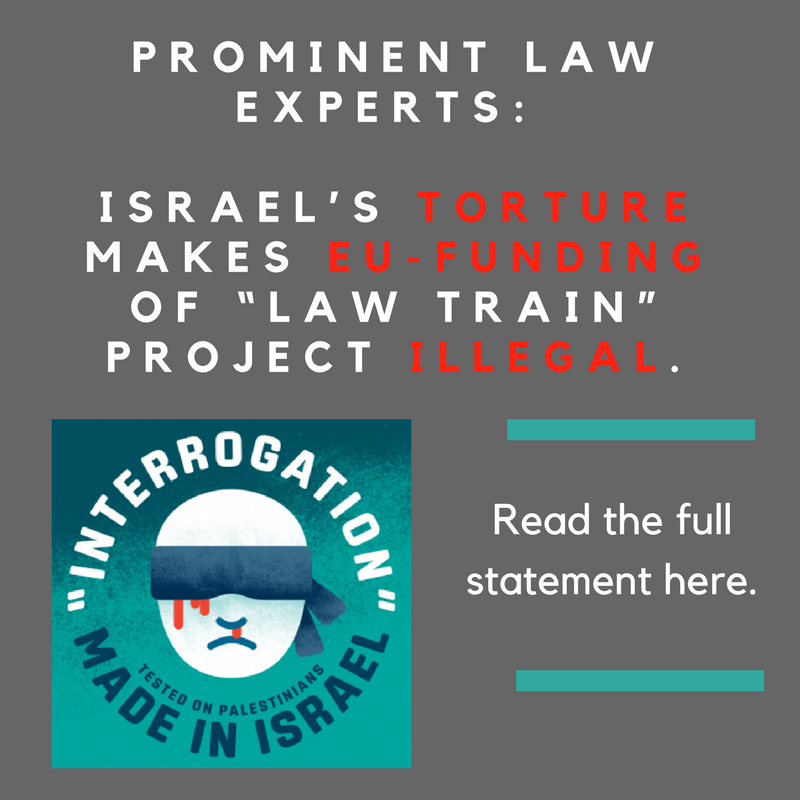 LAW TRAIN brings together the Israeli Police, the Israeli Ministry for Public Security (IMPS) and European police forces, universities and private companies with the aim of “harmonizing and sharing interrogation techniques between the countries”. The EU is funding this project with over 5 million euros, as part of its Horizon2020 programme for research and innovation.

In their expert opinion, the legal scholars argue that the EU cannot fund the Israeli Ministry for Public Security, which oversees the Israeli police as well the Israeli Prison Service and the secret service, without violating its own regulations. They document how the IMPS is responsible for or complicit in torture, other crimes against humanity and war crimes, and therefore guilty of grave professional misconduct as defined by the European Union’s Financial Regulations.

The use of torture by Israeli interrogators has been extensively documented in the international and Israeli press and confirmed by international investigators and by Israeli interrogators themselves. In June 2016, the UN Committee against Torture denounced Israel’s use of torture and its illegal, abusive techniques during interrogations by its police and prison staff. â¨The European Union’s participation in the LAWTRAIN project, and its allocation of funds to the Israel Ministry of Public Security through this project, therefore violates the EU’s own norms.

The EU should immediately stop the participation and allocation of funds to the Israel Ministry of Public Security through the LAW TRAIN project and set up criteria to ensure no repeat of such funding happens. Not only should the EU Commission work in line with the EU’s stated commitment to combat torture, it has to respect international law and EU norms in all its activities.

LAW TRAIN and other EU funded projects with the Israeli military and security sector show that the ethics and legal checks of the EU Commission are insufficient and need urgent review and more democratic overview.

In August last years, the Portuguese Ministry of Justice shut down its participation in the project due to pressure from Portuguese civil society and members of parliament .

Palestinian and European civil society and human rights organisations, including the World Organisation Against Torture and members of the European Parliament, have also raised critical questions regarding the LAW TRAIN project and implications of the participation of the Israeli military, police and homeland security sector in EU funding programs.

To read the full legal opinion and see the full list of signatories, see here.