MORE
Dark mode
Font size
Follow us
Skip to content
Place: Gathering at the petrol station in Beituniya (Ramallah)
Date: Tuesday 15th May 2012
Time: 1 pm
On the 64th Anniversary of the Palestinian Nakba (Catastrophe), the Independent Youth Movement Herak Shebabi and Stop the Wall have called for a mass demonstration to converge on Ofer prison in the West Bank.

The protest presses for the respect of the demands of the hunger striking prisoners and aims to physically stand in the face of the Israeli occupation forces, who have imprisoned over the decades an estimated 40% of the male population in the occupied West Bank and Gaza Strip and continue to enforce our “ongoing Nakba”.

“Like every year we commemorate the Nakba by taking to the streets and raising our voices in anger and defiance of Israel’s system of occupation, colonisation and apartheid. This year’s commemorations take place at a critical time for the Palestinian struggle, as Bilal Diab and Tha’ir Halahleh enter their 77th days of hunger strike, with 2,000 other Palestinian prisoners refusing food. The international community still refuses to take any substantive action to force Israel’s compliance with international law, and thus we hold that these United Nations and foreign governments have failed in their legal obligations to uphold and enforce the Geneva Conventions. They are not only undermining the very international legal standards they have created, through their silence and inaction they are directly responsible for what will happen when the first hunger striker dies.”

“This hunger strike is an example of mass, popular resistance to Israel from deep within its prisons, but the hunger strikers’ mass resistance must be echoed by mass movements on the streets of Palestine to directly challenge the Israeli state. We are the colonised, occupied indigenous population of Palestine, and Israel is the colonial occupier of our land. We march to Ofer to show our solidarity with the hunger strikers and to demand that all Palestinian prisoners in Israel jails are freed. We also march to ensure that the Apartheid Wall will fall one day, all settlements will be dismantled, Palestinians living within Israel will be granted full civil and human rights, and that every single Palestinian refugee can return to his or her land from which they were ethnically cleansed in 1948. Only then will our Nakba end.”

Attacks by Israeli settlers on Palestinians in the West Bank continue apace, while the occupational forces provide the aggressors' with protection. The attacks, ranging from destruction of fruit trees to seizure of land, demonstrate Israel's continued commitment to policies of terrorism and ethnic cleansing as they continue to expand and build on stolen land.   […] 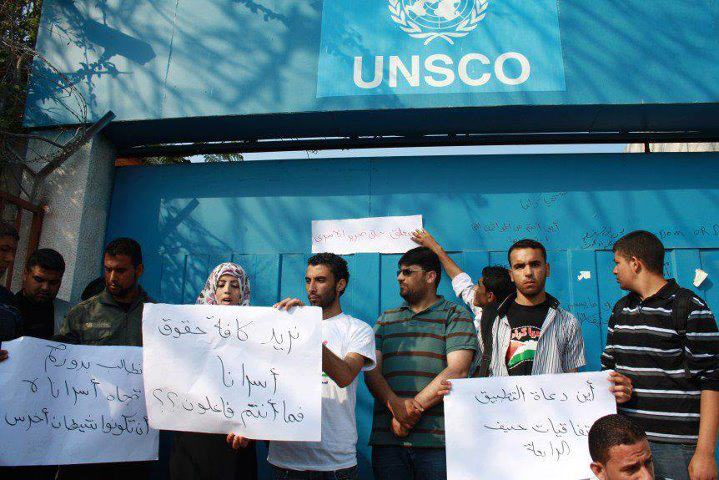 Gazans create a blockade of their own

The following is a statement released by youth organisation Palestinians for Dignity, 13.5.12 – Local and international news agencies informed us last night, 12 May, that the Palestinian political establishment met with the representative of the Israeli apartheid regime, Isaac Molkho, in Ramallah to deliver the latter's response to a previous letter that was sent by […]