Friday 31 of January, in coordination with the international Stop the JNF Campaign the Union of Palestinian Farmers and the anti-apartheid Wall Campaign planted olive seedlings in the village of Sebastia in Nablus, a continuation of the activities of anti-113anniversary of the establishment of the Jewish National Fund.

The activists of the Farmers Union and the grassroots campaign Stop the Wall with participation of the youth group"Tjwal" planted seedlings in the land threatened with confiscation near to "Shafi Shomron" settlement in Sebastia; This event comes within the second "One Million Trees" campaign, submitted by the Arab Society for the Protection of Nature. 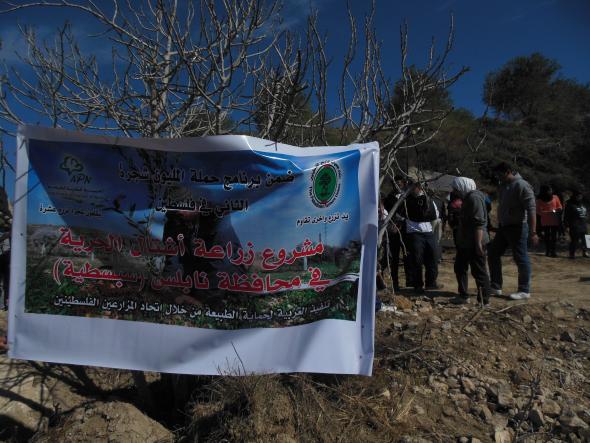 Raafat Alkhndakja, a member of the Executive Office of the Farmers Union, praised the role that the the Arab society played in support of the Palestinian farmers and their steadfastness, and that the Arab Society for the Protection of Nature and the Farmers Union will continue these activities to keep the Palestinian farmers on their land in front of all the attempts of settlers to seize their land and displace them.

Suhail Salman, the coordinator of Stop the Wall campaign, emphasized the need to continue with these activities because it carries a deep national meanings that aims to support the steadfastness of the Palestinian farmers in their lands against the Israeli government and settlers' attacks.

For more information on the international campaign to Stop the Jewish National Fund visit us at https://www.stopthejnf.org/.

Last Thursday, the 30th of January, the Norwegian Government Pension Fund Global (GPFG) announced its reconsideration over the previous decision made in August 2013, which rescinded the 2010 ban over two Israeli companies, Africa Israel Investments and its construction subsidiary, Danya Cebus. The re-exclusion was made due to “an unacceptable risk of the companies, through […]

The popular resistance activists and political forces built the village of Ein Hejleh on the Church's lands belonging to Hejleh Monastery in the Palestinian Jordan Valley. The campaign aims at standing against the decisions of the occupation to judaize and confiscate the Jordan Vally area, and to revitalizing the Canaanite Palestinian village in the Palestinian […]

Update to the Urgent Appeal issued in April 2013 by the Civic Coalition for Palestinian Rights in Jerusalem (The Appeal, including background, is available at: https://civiccoalition-jerusalem.org/human-rights-resources/publications/submissions/urgent-appeal-action-0     On Sunday, 26 January 2014, the Israeli Supreme Court sanctioned completion of the illegal section of the “Begin Highway” that cuts through the Palestinian community of Beit Safafa in occupied […]