‘Azzun ‘Atma is a small village in Qalqiliya district of the West Bank that has been occupied since 1967. It is governed as a C-area, meaning that Israeli authorities have full security and civil control. The village of ‘Azzun ‘Atma faces many difficulties due to the checkpoints and the Apartheid Wall, and the settlements that surround the area of the village. Persons from the area who work inside Israel struggle with bad working conditions.

There are approximately 2000 inhabitants in the village; 80 per cent of them work in agriculture, and 15 per cent work inside Israel[1]. The village consists of 7000 dunoms of land (7 km2). Others claim this figure is more than 8000 dunoms (8 km2), of which 336 dunoms (0,3 km2) is built-up area[2]. ‘Azuun ‘Atma consists of land deemed to be of high agricultural value, and there are many greenhouses in the area. There are also five so-called artisanal wells (groundwater).

There have been complications in this area, and in this particular village since its occupation in 1967. In 1968 a main road was built to the south of the village by the Israeli government, and in 1976 Israel started confiscating land from the farmers in ‘Azzun ‘Atma. In 1983 the first settlement was built. Approximately 2300 dunoms (2.3 km2) of the village have been confiscated to build the settlements. In addition, 1000 dunoms (1 km2) have been confiscated to build the Apartheid Wall surrounding the village, and to its buffer zone.

‘Azzun ‘Atma is today surrounded by four settlements in all directions: north, west, south and east. The settlements are: Shaare Tikva, Oranit, Elkana and Etz Efrayim. The population in these colonies is assumed to be close to 13 000 persons[3]. ‘Azzun ‘Atma was also one of the first villages where the Apartheid Wall was built, and work on the Wall started in 2002. There are currently three checkpoints in the village: two for the passing of persons, and one agricultural border. In the agricultural border farmers need permission from the Israeli military forces to pass through and reach their land so they can work and bring out produce. The regular checkpoints are located at either end of the village.

On 13 October 2003 the checkpoints started operating. It was open between 5am and 6pm. From the very beginning, this presented many problems, for instance in the cases where medical assistance was needed. Nine months after the opening of the checkpoints, the operating hours were extended to 10pm. This arrangement lasted for six years, that is, up until 2010. In the course of these years, only persons with a permit stating that they live in the village, or a permit from the Israeli DCO (District Coordination Office), were allowed to enter and exit the village. These rules apply only to Palestinian nationals.

On 2 March 2010 the checkpoints and borders were opened; every person passing was checked, but entry was no longer restricted. On this date, to the north of the village (just outside the village), two new checkpoints for people crossing were established which effectively parted the village in two. Ten families residing in the north need to cross the border with a permit. These families constitute approximately 74 persons, including 24 school children and university students. Approximately three years later, on 21 September 2013, a Palestinian person from Beit Hanin killed an Israeli soldier by the checkpoint. The result is yet again that the entry and exit from ‘Azzun ‘Atma is restricted, and demands a permit, as before 2010. This is a clear example of collective punishment, as the action of one person merited punishing a whole village according to the Israeli authorities.

There are many difficulties connected to the checkpoints. It is difficult for family members and friends to visit each other; especially for persons not residing in ‘Azzun ‘Atma to make visits there. This represents emotional difficulties, in relation to for instance wedding celebrations, religious celebrations and other holidays. One story is of a young couple, engaged to be married, who was unable to meet each other elsewhere than in the checkpoint itself due to restrictions in crossing the border of the village. One woman’s brothers were denied access to the village for four years, so the woman herself had to leave the village each time they wished to meet. 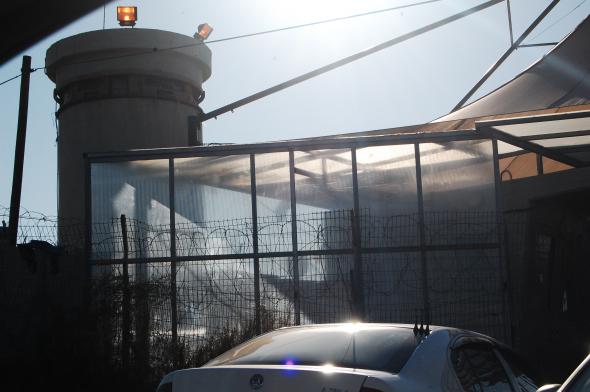 Before the second Intifada, the village of ‘Azzun ‘Atma was an important junction between the Palestinians residing in the ’48[4] and the West Bank. It was considered an area of thriving economic activity, with markets and restaurants. Over the years, the economic foundation has been destroyed. The economic difficulty these checkpoints cause is that thousands of Palestinians need to pass through them in order to reach their workplaces. They need special permits to enter through the checkpoints, as they often work in the ’48. The problems connected to passing through the checkpoints have resulted in a number of Palestinians, mostly workers, who are smuggled in and out of the village. Many others who need to cross to reach their workplace are sometimes not able to do so, and thereby creating economic problems for themselves and their families.

The isolation of the village through the checkpoints represents a health hazard. The health centre in the village is visited by a doctor only two days a week for several hours. If he is not allowed to pass through and into the village, the village risks being without a doctor for a week. One woman in labour was reportedly denied exit so that she could not get to a hospital. A man (22) who had fallen victim to a work injury and who was badly hurt was denied exit. After two-three hours he was allowed to pass, but had already deceased.

Besides the logistical, economic, physical and emotional difficulties the checkpoints represent, the actual act of crossing was previously also considered a physical danger in itself. Extended use of x-ray machines were deployed, which is presumed to be a hazard if the body is exposed to this frequently over a period of time. It is presumed to cause cancer, and it may be harmful for pregnant women etc. These are no longer in use.

Another grave problem is that the checkpoints isolate the schools in the village. It is often difficult for teachers who work in ‘Azzun ‘Atma, but reside outside the village, to enter through the checkpoints. Students who attend school in ‘Azzun’ Atma, but who live in the surrounding village of Beit Amin also face this problem. There are two schools in the village with 650 students in total. One school is situated right next to the Separation Wall, and a settlement. They have experienced vandalism from the settlers, such as the repeated breaking of windows and “flooding” of sewage waters from the settlers into the school. Between 1994 and 2008, this school was prohibited to build additional school buildings, such as new classrooms. They were only permitted to perform refurbishing work on their existing building. On one occasion, two girls’ schools (one from ‘Azzun ‘Atma) were planning to meet for an activity day in ‘Azzun ‘Atma. The school from outside ‘Azzun ‘Atma was denied entrance, and they ended up carrying out their activity day by the checkpoint.

This village has received international attention, and international aid assistance over the years, especially from an Italian aid organisation and also the Norwegian government. However, non-governmental organisations have also experienced troubles passing through the checkpoints.

The difficulties the village of ‘Azzun ‘Atma face are many faceted. They are of an emotional and psychological manner, as well as economic, and physical and health related. The aim of the Israeli authorities over the years in this area seems to be to isolate the area, and in so doing strangling the everyday life of ordinary Palestinians. The farmers in the village and the workers who are forced to work in Israeli territory face difficult working conditions. The young generation, the pupils of the schools in ‘Azzun ‘Atma risk not receiving the necessary/appropriate level of education, as both they and their teachers face problems entering through the checkpoints. This seems to be yet another way for the Israeli authorities to oppress Palestinians. It is also highly alarming that persons in the village have been denied medical assistance, either because they were denied exit, or because a doctor was denied entrance. The restrictions on the checkpoints and the Apartheid Wall isolate the village, thus turning ‘Azzun ‘Atma into a semi-prison. It is clear that Israel violates international law, including the Geneva Conventions, which Israel has ratified.

Fieldwork and interview with mayor of ‘Azzun ‘Atma.

Deir Istya is an old historic village with architecture and city walls from the Mamluk era, the Roman and Byzantine times and the Ottoman Empire. It is located in the West Bank C-area, meaning that Israel has full security and civil control over the area. It is one of the oldest villages in the West […]

The town of Beit Jala lies in Bethlehem district in the West Bank, governed by it’s own municipality and mayor. It is both A-area (approximately 25 per cent) and C-area (the remaining percentage of Beit Jala-land)[1]. Traditionally, the inhabitants of Beit Jala consisted of 80 per cent Christians, but today this figure is much less. […]

2 4 2014 The Union of Palestinian Farmers and the grass-roots campaign Stop the Wall, in collaboration with the Ministry of Agriculture, and the Association of Kafr al-Labad planted more than 100 olive seedlings on a land threatened with confiscation near "Avni Hefetz" settlement, which was built on the lands of Kafr al-Labad and Shufa […]