Deir Istya is an old historic village with architecture and city walls from the Mamluk era, the Roman and Byzantine times and the Ottoman Empire. It is located in the West Bank C-area, meaning that Israel has full security and civil control over the area. It is one of the oldest villages in the West Bank. Approximately 3500 persons inhabit the village. There are currently ten settlements that encircle this area. Five of them are on the land of Deir Istya, while the others claim land from surrounding villages. The village faces many problems, particularly during the season of olive harvest. The settlers used to  attack the farmers and stolen the harvest during the season.

Deir Istya has recently (15. January 2014) been attacked by settlers. The façade of the mosque in the village was burned, and racist slogans were spray-painted by the entrance. The settlers left when a man coming to perform morning prayer appeared. The fire was extinguished. The night before this event, villagers of Deir Istya held some settlers captured as they were caught trying to sabotage and attack some villagers and their property. The villagers claim that the Israeli military forces therefore implemented a curfew. The villagers further believe the Israeli forces were aware of the upcoming attack and in installing a curfew succeeded in aiding the settlers in achieving their mission. 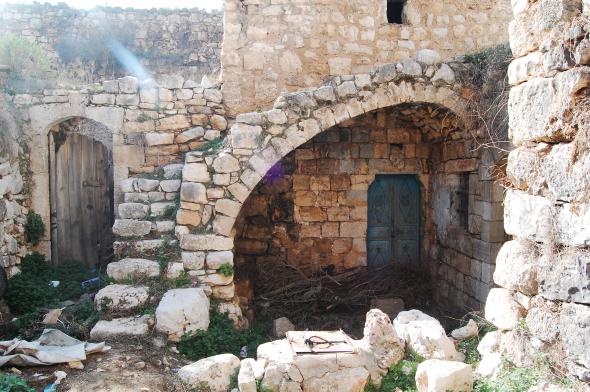 The Wadi Qana is a valley with extensive historical roots that date back a few thousand years. The total area of Wadi Qana amounts to around 10 000 dunoms (10 km2). There are eleven natural springs in the area, and there have been planted lemon and orange trees here since the 1940’s. However, the valley has experienced troubles since the commencement of the occupation in 1967.

In 1987 the area was made into a nature reserve, and Israel demanded upon signing the Oslo Accords that this would be recognised in the agreement. According to the Oslo Accords, it was declared a C-area[1]. Many families used to live in the area, but have forced to move over the years. Most of them were forced to leave after 1967. Today, only a handful of families remain. Many farmers have been evicted from their land, and been forced to uproot thousands of trees, on the basis that the area is a nature reserve.

There are currently seven settlements here, on the top of the hills that surround the valley. They are: Karne Shomron, Maale Shomron, Yakir, Immanuel, Ginnot Shomron, Nofim and Oramin Nofin. Together the settlements house over ten thousand persons.

From 1990’s the settlements surrounding the valley started polluting the groundwater with sewage waters, so that the water is no longer suitable for drinking for animals or humans. Settlers dump waste and sewage into the valley, gravely endangering the environment of the valley and killing trees and vegetation as well as forcing farmers to evacuate. There are many olive trees in the valley now, as they require less water than lemon and orange trees. There has also been problems connected to the construction and opening of settler roads, as these inhibit and forbid farmers from reaching their land. It has also lead to the destruction of approximately one hundred olive trees belonging to farmers in the Deir Istya-area. The settlers have even stolen large amounts of soil from the valley.

When the Israeli government decided to turn the area into a nature reservation, it also became illegal to build and to plant or uproot vegetation, for Palestinians. Israel and settlers on the other hand, are building settlements and both planting and uprooting trees, as well as taking ground water for themselves and polluting other natural water springs. There are as of now, hundreds of olive trees that have been marked with spray paint by Israeli authorities and the settlers to be uprooted. These trees are young trees planted in recent years.

The settlers in the area are systematically harassing Palestinians in the Deir Istya and Wadi Qana-area. They have attacked a place of worship and are destroying the livelihood of many farmers as they uproot trees in Wadi Qana and refuse them to plant new ones. They are also destroying what Israel has declared a nature reserve by polluting the area. Israeli authorities do not condemn the actions of the settlers; on the contrary they are facilitating them.

The municipality of Deir Istya.

The town of Beit Jala lies in Bethlehem district in the West Bank, governed by it’s own municipality and mayor. It is both A-area (approximately 25 per cent) and C-area (the remaining percentage of Beit Jala-land)[1]. Traditionally, the inhabitants of Beit Jala consisted of 80 per cent Christians, but today this figure is much less. […]

‘Azzun ‘Atma is a small village in Qalqiliya district of the West Bank that has been occupied since 1967. It is governed as a C-area, meaning that Israeli authorities have full security and civil control. The village of ‘Azzun ‘Atma faces many difficulties due to the checkpoints and the Apartheid Wall, and the settlements that […]

2 4 2014 The Union of Palestinian Farmers and the grass-roots campaign Stop the Wall, in collaboration with the Ministry of Agriculture, and the Association of Kafr al-Labad planted more than 100 olive seedlings on a land threatened with confiscation near "Avni Hefetz" settlement, which was built on the lands of Kafr al-Labad and Shufa […]