Today, May 4 2015, the Land Defense Coalition and the Jordan Valley Solidarity has submitted a letter to the EU Commission and diplomatic missions of member states asking for urgent action and denouncing the military exercises that Israel is holding to an unprecedented length and extent in the Jordan Valley occupied Palestinian territory. The organizations ask for clear actions, including the suspension of the EU-Israel Association Agreement and the immediate exclusion of Israeli military and security companies from the EU funding cycle Horizon2020. Read the full text of the letter in the following.

To: The Office of the European Union Representative West Bank and Gaza Strip,

We are writing to ask you to a) urgently intervene through the appropriate diplomatic channels with the Israeli authorities to ensure an immediate stop of the military training exercises Israel is holding in the Jordan Valley to an unprecedented extent and length since yesterday, Sunday May 3, until likely Thursday, May 7, b) pressure for an end to all Israeli military training in Palestinian occupied territory and the revocation of the military zones and firing zones c) take effective steps to stop Israel’s ongoing population transfer in Area C, including the exclusion of all Israeli military and security companies from funding within the framework of Horizon2020 and the suspension of the EU-Israel Association Agreement.

Since yesterday, Sunday May 3, in the area of Twayyel, in the Aqraba area of the Jordan Valley, a heavy military exercise has started which, according to witnesses, includes over 100 military vehicles, including helicopters and other heavy military equipment. The population had not been informed but alerted by the construction of a military camp in the area roughly a week ago and suffers currently threats to their lives, properties and livelihoods.

In a large area around the Hamra checkpoint, which includes Humsa Fouqa, Khirbet Ibziq, al Borj, al Meeta and al Maleh areas and Ras ar Ahmar, last Thursday, April 30, Israeli military forces addressed the Bedouin and farming communities living there forcing them to sign papers that obliged them to leave the region starting from today Monday 4th of May to Thursday 7th of May, as the army intends to conduct training. These communities comprise 47 extended families. Since this morning, heavy explosions are being heard that are similar to another military training in the same area of Humsa Fouqa, held on April 28. That military exercise had resulted in the destruction of 3,000 to 4,000 dunams of crops and trees after the shootings and ammunitions of the Israeli army started fire on the land and Palestinian firefighter crews were prevented from reaching the area.

While some of the families are currently leaving the area, part of the population in the area around the Hamra checkpoint has decided to stay in the area during the training and is risking immediate threat to their lives. All of the affected population is deeply concerned about their livelihoods. Their harvest may be destroyed even further through fires ignited during the military training and abandoning or moving their livestock during the current lambing season would risk the survival of large part of the animals. The communities further fear for their property, including homes, animal sheds and water storage may be damaged.

Military trainings in the Jordan Valley have increased dramatically since 2012 and are part and parcel of Israel's systematic and forced transfer of the Palestinian population from the Area C, which is implemented through a variety of means including demolitions, denial of access to water, movement and access restrictions. Bedouin communities as the above are to be forcibly transferred in the so-called 'relocation zones' currently under construction in the area of Abu Dis and in planning around Jericho. In May 2014, Col. Einav Shalev, operations officer of the Central Command told the subcommittee of the Knesset Foreign Affairs and Defense Committee that "the goal of preventing illegal construction is one of the main reasons the Israel Defense Forces has recently increased its training in the Jordan Valley"[1]. Once people are transferred, the area is ready to be annexed and Palestinians will be left with some 13% of their historic homeland, reduced to ghettos and Bantustans.

The equipment used during these operations is provided partially by Israeli military companies, which find in the military trainings held in the West Bank another opportunity to further develop and showcase their technology.

According to UN OCHA, approximately 18% of the West Bank has been designated permanently as a closed military zone for training, or “firing zone”[2]. This is roughly the same amount of the West Bank under full Palestinian authority (Area A, 17.7%). Some 5,000 Palestinians reside in the firing zones. They live in 38 communities and are mostly Bedouin tribes that have been expelled to this area during the ethnic cleansing of the Naqab (Negev) from 1948-52. The declaration of military firing zones comes together with a series of human rights violations and grave breaches of Israel’s obligations under international law, including the right to life, adequate housing, access to water and sanitation as well Israel’s obligation to protect the occupied population and not to alter the demographic composition of the area it holds occupied.

The International Criminal Court has defined the forcible and arbitrary transfer of population as a crime against humanity when committed as part of a widespread or systematic attack against a civilian population, such as is the case of Israel’s policies against the Palestinian people. The crime of forcible transfer of populations can be carried out through a large range of 'coercive pressures' forcing people to flee their homes. Displacement of individuals when undertaken on discriminatory grounds may amount to persecution. Transfer of population “designed to divide the population along racial lines by the creation of separate reserves and ghettos for the members of a racial group or groups” as well as “the deliberate creation of conditions preventing the full development of such a group or groups, in particular by denying to members of a racial group or groups basic human rights and freedoms, including […] the right to freedom of movement and residence” is a core part of the policies that constitute the crime of apartheid.

Already in 2011, EU Heads of Mission report on Area C and Palestinian State-Building[3] has underlined that Israeli policies in Area C “result in forced transfer of the native population” and pointed out that the Israeli practice of maintaining over decades closed military and ‘firing zones’ is illegal and has grave consequences for the population. In 2012, the UN Secretary-General stated that the implementation of the proposed 'relocation' would amount to individual and mass forcible transfers and forced evictions, prohibited under international humanitarian law and human rights law. The 2012 Council conclusions on the Middle East process express “deep concern about developments on the ground which threaten to make a two-state solution impossible”[4], in particular Israeli policies of forced transfer in Area C. The resolution of the 2012 EU parliament on policy on the West Bank and Jerusalem “calls on the Council and the Commission to continue to address these issues at all levels in the EU's bilateral relations with Israel and the Palestinian Authority; stresses that Israel's commitment to respect its obligations under international human rights and humanitarian law towards the Palestinian population must be taken into full consideration in the EU's bilateral relations with the country”[5]. The policy briefing on Area C by the policy department the director-general for external relations of the EU concludes that “nothing of substance has been accomplished to implement the minimal recommendations set out by the EU's 2011 report on Area C. While the EU has expressed its concern about the state of affairs, decisive effective action is long overdue”[6], including the suspension of the EU-Israel Association Agreement.

In 1967 there were 350,000 Palestinians living in what is now Area C. Today there are only 150,000 left. Some Israeli politicians consider this number “acceptable to integrate into the Jewish state”[7]. The population transfer is a de facto annexation making any formal steps redundant. The EU cannot wait any longer before taking strong responses and effective measures to be taken, including: 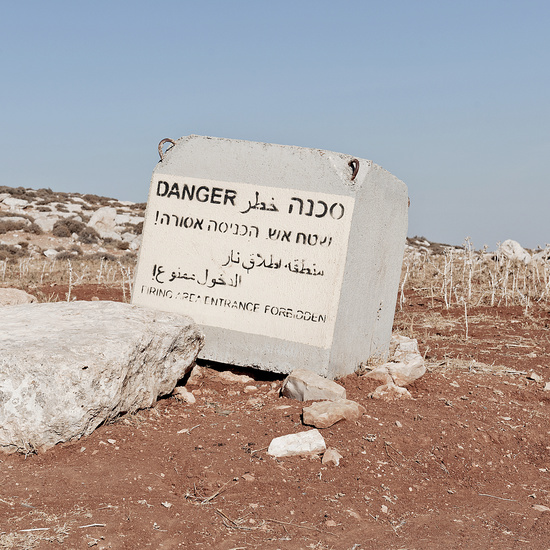 Since Sunday morning at 4 am Israeli military is operating in a large area around Twayyel, in Aqraba area in the Jordan Valley. Large swaths of agricultural land and a good part of the people's harvest has already been destroyed while the operations defined by Israel as 'military training' are still ongoing.  Since a week, […]