1.10.2015 Israeli police continue their violent crackdown on Palestinians protesting at Al Aqsa mosque in Jerusalem. The British private security firm G4S has contracts equipping and providing services to the Israeli police and prisons, making G4S complicit in this violence.

Al Aqsa mosque is one of the holiest sites in Islam. For centuries, Muslims around the world have made pilgrimage to the mosque as a religious rite. For the Palestinians of Jerusalem, it is also their local mosque. But beyond its religious significance to Muslims, Al Aqsa is a Palestinian heritage site, cherished by Palestinians of all faiths, including Christians and non-religious people too.

Israel has never shied away from targeting Palestinian heritage sites for takeover or demolition, a part of a systematic attempt to expand illegal settlements and wipe out Palestinian culture and history. This typical colonial tactic is nothing new and should not be mistaken for a ‘religious’ or ‘ethnic’ conflict.

War on Want has previously highlighted this in the Palestinian village of Silwan, where settlers have invaded and occupied a Palestinian neighbourhood. Having forcibly evicted Palestinians from their homes, the settlers in Silwan together with the the Israeli government are building a tourist park there called ‘City of David’.

This is a flagrant violation of international law, and yet it continues at an unrelenting pace – ignored by the UK government and the rest of the international community. 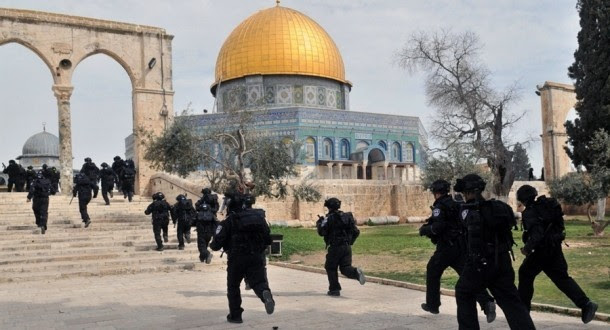 Often groups of Israeli settlers organise ‘visits’ to Al Aqsa mosque, their sole purpose to antagonise and threaten Palestinians who understandably fear that the settlers and the Israeli government are taking steps to confiscate the mosque. War on Want partner Stop the Wall campaign says that “Israel wants to have the upper hand, to have full sovereignty over Al Aqsa mosque…and they’ve turned it into a battlefield.” In decades past, a settler group was even found to be planning to blow up the mosque, just one example of the constant settler violence against Palestinians.

In this context, you can imagine the despair Palestinians feel when settlers escorted by Israeli police and Israeli Special Forces show up to Al Aqsa, their beloved historic religious and cultural centre.

On top of this, Israel has banned Palestinian men under the age of 50 from entering the mosque.

Palestinians, fed up with this injustice, declared a ‘Day of Rage’ on Tuesday 29 September. Demonstrations were held all over Palestine against settler and police incursions at Al Aqsa, and in support of the thousands of Palestinian political prisoners currently detained in the occupation jails. The Israeli police cracked down with violence, attacking protestors with tear gas and live fire.

The Israeli settlement policy is not some fringe right-wing agenda. It is, and has been for decades, a part of Israeli government policy. So long as the UK continues to support Israel through military partnerships and commercial trade, it is arming and supporting the settlements. No ‘strongly worded statement’ against settlement expansion from the UK government changes that fact.

However, there is an even more specific way in which the UK is complicit in the repression at Al Aqsa. G4S, the British private security company that has contracts with the Israeli Prison Service, has recently acquired a long-term contract to equip a new police training centre just outside of Jerusalem.  Several Palestinians, including children, have been arrested over the past weeks for participating in demonstrations in defence of Al Aqsa. That means Israeli police from a G4S-equipped training centre  are arresting Palestinians and taking them into G4S-secured prisons.

That’s why it is important for us to keep up the pressure on G4S. This company has extraordinary levels of complicity in Israeli apartheid, and it must be stopped.

Please sign up for updates on our Stop G4S campaign, and take action to stop arming Israel today.

The efforts for an immediate and comprehensive military embargo and the 'Stop G4S' campaign are initiatives promoted by the Palestinian Boycott, Divestment and Sanctions National Committee (BNC) and adopted by many partners across the world, including War on Want.

For a list of victories and global efforts, please see: https://www.bdsmovement.net/activecamps/g4s