As part of the calls for Boycott, Divestment and Sanctions on Israel, Palestinian organizations and municipalities urge governments and public institutions to end cooperation with the Israeli state-owned water company Mekorot. This year, movements in Bahia, in the northeast of Brazil, have joined in the struggle against these dirty deals demanding their state water companies end a cooperation agreement signed with Mekorot in 2013.

Denounced for its participation in Israeli human rights violations even by the United Nations, Mekorot is responsible for implementing ‘water apartheid’ on Palestinians, including the international crime of pillage of natural resources in occupied territory, discrimination against the Palestinian people as an ethnic group and vital support for the illegal settlement enterprise. The company took monopoly control over all water sources in the occupied territories  and deprives especially Palestinian communities that Israel wants to expel from their lands of a

ccess to water. Palestinian consumption in the Occupied Palestinian Territories is about 70 litres a day per person – well below the 100 litres recommended by the World Health Organization (WHO) – whereas Israeli daily per capita consumption is about four times as much. In addition, Mekorot is responsible for projects of "management" of water with devastating environmental effects, including the slow destruction of a world heritage as the Dead Sea.

The Palestinian Anti-Apartheid Wall Campaign, the Palestinian Farmers Union and the Land Defense Coalition, a coordination of Palestinian unions and popular movements, have been raising awareness with civil society in Bahia since last year. Jointly with Brazilian partners, they have produced a poster and brochure to explain Israeli violations of the right to water of the Palestinian people and show how the legacy of Brazil's past of colonialism, genocide and slavery leads to a situation where farmers in both realities face similar methods of water theft implemented by corporations. 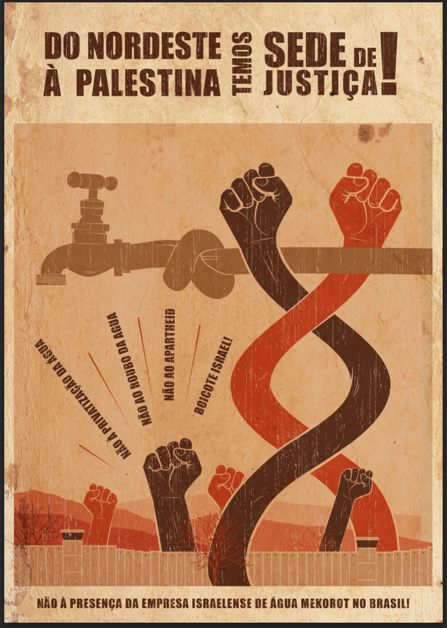 President of the Palestinian farmers union, Rafat Khandakji explains:
“Mekorot and other Israeli companies in the water and agribusiness sector export their technologies since the 60s to Brazil. In this way, Israel finances its settlement policy and strengthens the concentration land and profits in Brazil. At the same time, it spreads a false idea that it supports the development of other countries, trying to hide its ongoing crimes against our people. The technical cooperation agreement that Bahia's state owned water companies, Embasa and CERB, signed in 2013 is part and parcel of this policy.”

Ten days ago, the Brazilian Small Farmers Movement (MPA), the Movement of the People Affected by Dams  (MAB), the Popular Youth Uprising, the Pastoral Commission of the Land and the Regional Institute of Small Sustainable Agriculture (IRPAA), joined the Palestinian movements in an open letter to Bahia's water companies urging them to cut their ties with Mekorot.

Movements declare in the letter:
"We reject the use of these technologies developed during decades of ethnic cleansing against the Palestinian people. We insist that Brazil has the knowledge and enough technology to find solutions to the sanitation issues and access to water. One has to simply implement the necessary policies. […]
"While Mekorot and Israel are spreading in Brazil and globally propaganda that are helping the people of Bahia, in fact, contracts between Israeli water companies and public companies in Bahia's sanitation sector only contribute to processes of privatization of our water. " (See full English translation below)

The letter comes after a request for information filed by the representative in Bahia's legislative assembly Marcelino Galo. The request cites the official position of the Brazilian government that rejects any form of legitimizing of the occupation of Palestinian territory and defends the creation of a Palestinian state and notes:
"In respect of UN resolutions, the principles of self-determination of peoples, human dignity and the right to land, we require information regarding the agreement [with Mekorot], and if it is confirmed, we recommend the end of any relationship with the company Mekorot, a conglomerate with a prominent role in the violation of the rights of the Palestinian people."

Opposition to the cooperation with Mekorot has been raised under the slogan 'From Bahia to Palestine, we thirst for Justice” at the historic march for water rights, organized every year in occasion of the World Water Day (March 22) by the Union of Water, Sewage and Environmental Workers in the State of Bahia together with partner organizations. The march is the greatest demonstration in defense of the right to water in Latin America. As well during the third Seminar on Water Governance in the Bahia, the opposition to the ties with Mekorot has been voiced.

With this mobilization, Bahia joins an ongoing global campaign to Stop Mekorot. The Stop the Wall Campaign states:
“It is time to end ties with this human rights violating company and to replace them with ties of solidarity among the Palestinian and the Brazilian people. Buenos Aires, Lisbon, the Netherlands and São Paulo have already shown the path by ending its contracts with Mekorot. We trust that with the support of civil society and political representatives supportive human rights we can cancel as well this contract.”

In fact, the successful campaign against the contract for a water treatment plant, which the state government of Buenos Aires had signed with Mekorot, has shown that the company literally exports its water apartheid benefiting from water privatization. Argentina’s Public sector union ATE stated during its successful campaign against: “if the tender is awarded to Mekorot water would rank as a luxury item and not as a vital resource that is a social right, and, secondly, human rights would be violated by giving the award to a company that supports the Palestinian genocide.”

Full text of the Open Letter to Embasa and CERB:

Open letter to Embasa and CERB:

In Defense of Water Justice in Palestine and Bahia

The following organizations stand in solidarity with the request that arrives from Palestine denouncing the links between the institutions of the State of Bahia and the Israeli state-owned water company Mekorot. In 2013, the public water companies, Embasa and CERB, and the government of Bahia signed a technical cooperation agreement with Mekorot. At the end of 2015, the Secretary of Water Infrastructure and Sanitation of Bahia participated in a trip to Israel, organized by the Israeli consulate. These relationships are widely used as propaganda by Israel at local, national and global level.
The Palestinian people are suffering and resisting Israeli aggression since the establishment of the Israeli state, which resulted in the expulsion of 75% of the Palestinian people from the lands that are now controlled by Israel, events known as "Nakba" ( "catastrophe" in Arabic ). Today, Israel continues its ethnic cleansing policies, segregation and racial discrimination, and occupies and colonizes every day more Palestinian land. The illegal settlements in Palestinian territory, the Apartheid Wall – up to 8 meters high and 700 km long – and the theft of Palestinian water, are essential tools that confine the Palestinian people to an area of âânot more than 13% of their historical homeland.
Mekorot built and manages the entire national Israeli water network implementing a "water apartheid" against the Palestinian people, pillaging Palestinian natural resources and creating the necessary conditions for the illegal colonization process. Palestinian water consumption in the occupied territories is about 70 liters per person while the daily Israeli consumption per capita is about 300 liters.
In the 1950s Mekorot diverted and almost dried up the Jordan River to serve Israeli communities. With the occupation of the West Bank, Gaza and Golan Heights in 1967, the company monopolized control over water sources in these territories for the benefit of illegal Israeli settlements and continues denying access to water to Palestinian communities as a tool for ethnic cleansing.
These 'experiences' are exported by companies such as Mekorot, to finance the Israeli economy based on war and colonization.
To cut these sources of international funding and legitimization of Israeli politics, the Palestinian political and social organizations, in 2005 launched an appeal to the world to boycott, divest and to impose sanctions against Israel. This movement has been able to cut contracts of Mekorot in Buenos Aires, Lisbon, the Netherlands and São Paulo. It is time to cut the relations in Bahia with this company!
So we ask Embasa, CERB and the Secretary of Water Infrastructure and Sanitation to immediately end its relations with Mekorot. We reject the use of these technologies developed during decades of ethnic cleansing against the Palestinian people. We insist that Brazil has the knowledge and enough technology to find solutions to its sanitation problems and guarantee access to water. It is about implementing the necessary policies.
While Mekorot and Israel promote in Brazil and around the world that they are helping the people of Bahia, contracts between Israeli companies and companies in the water and sanitation sector of the state of Bahia contribute, in fact, only to the processes of privatization of our water.
We stand together for the right to water for all, in Bahia, Brazil and Palestine.
Signed by:
From Palestine:
Palestinian Grassroots Anti-Apartheid Wall Campaign (Stop the Wall)
Land Defense Coalition
From Bahia:
Small Farmers Movement (MPA)
Movement of the People Affected by Dams (MAB)
Popular Youth Uprising
Pastoral Land Commission (CPT)
Regional Institute for Small and Appropriate Agriculture (IRPAA)