On April 10, about 100 activists from São Paulo and Rio de Janeiro held a protest against the 2018 edition of the LAAD, the International Corporate Security Trade Fair, which takes place this week in São Paulo. Known as “Fair of Death”, this is the biggest weapon trade market in Latin America and includes many Israeli companies as exhibitors.

Members of the BDS Movement in Brazil, the Anti Fascist Action of São Paulo, the Caveirão Não Campaign and Papo Reto Collective from Rio de Janeiro, the Movement of Homeless Workers (MTST) as well as other movements and activists from the favelas, the shanty towns, in Rio de Janeiro had organized the event.

From the Maré Complex in the city of Rio de Janeiro – a favela close to the international airport and surrounded by a wall – the journalist and community communicator Gizele Martins started the speeches. “If they criminalize our lives and internationalize militarization, we are here to internationalize the resistance against apartheid”. Gizele was in Palestine in July  2017 and was shocked by the similarities between Brazil and the occupied territories. The military control of life is one of them: Gizele is facing what Palestinian would call ‘flying checkpoints’ inside her neighbourhood and policing when crossing the city because of her social position and her neighbourhood has suffered and resisted continued military interventions for decade.

Similarily, Tainã Medeiros, member of the communication collective Papo Reto, denounces that last year the military police in Rio applied a strategy used commonly by Israeli forces, mainly in the city of Hebron. He condemned the invasion of houses and their permanent use as police posts during four months at the Samba Square, located in the Alemão Complex. As happens in Hebron, the police got into the houses without warning and occupied the upper floors to observe and shoot “criminals”. The Special Operations Battalion (BOPE) of the military police has also made some inroads into the favelas using kuffyas to cover faces, in an attempt to create confusion about who is the real enemy.

Soraya Misleh, a Brazilian-Palestinian activist, spoke about the 70 years of the ongoing Nakba, that initiated with the foundation of the state of Israel and expelled more than 800.000 Palestinians from their lands, including her parents. For Soraya, it is extremely symbolic to share this protest with people from Rio due to the daily massacres experienced by the two communities. “The same guns that promote the genocide of the black people in Brazil are killing the sons of the Palestinian mothers”, she said. In the last few years, Brasil became the fifth largest importer of Israeli weapons and in the last LAAD fair in 2016, there have been salespeople of more than 400 Israeli corporations.

In this year's edition, Carmor is one of the Israeli corporations present. They manufacture the "Guardians", or the armored anti-riot vehicles used by the Military Police of São Paulo. Another exhibitor is the Israeli-Brazilian joint venture Rafael Stefanini that aims to bring to Brazil the surveillance technologies, which are used to lay siege on Gaza and along the Wall in the West Bank.
The relations between Brazil and Israel are not restricted to the armaments trade, the two countries share police training and military strategies as well. In fact, much of the sales are targeting policing and the security sector and police officials are the largest public at the fair. 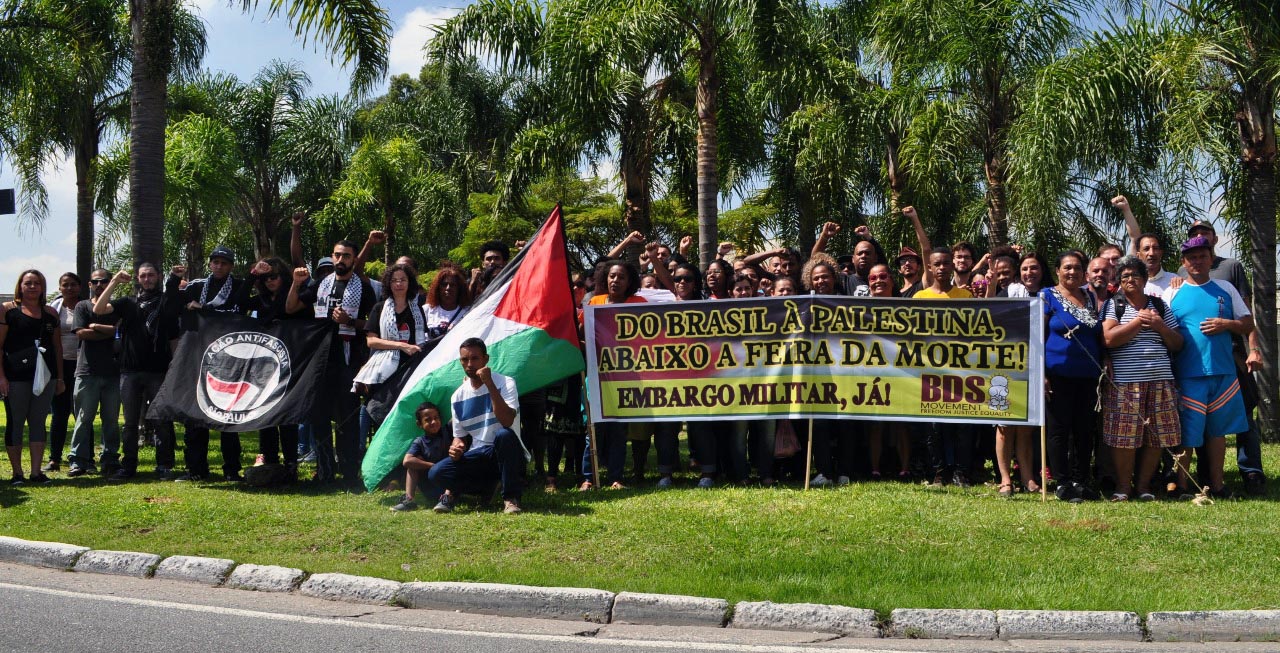