Israeli occupation forces shot dead a Palestinian mother during a dawn raid to West Bank Refugee Camp of Jenin on Friday, August 7th. Dalia Samoudi, 24, is a mother of two young children. She was holding her eight-month-old baby in her arms when a live bullet hit her in the chest, penetrated her liver and pancreas. Palestinians call on the international community to take action and hold Israeli apartheid accountable for its escalated violence and increased crimes against Palestinians amid the looming de jure annexation of the West Bank.

During a dawn raid to Jenin Refugee Camp on Friday, August 7th, the Israeli occupation forces shot dead a Palestinian woman. Dalia Samoudi, 24, succumbed to her wounds after being hit with a live bullet in the chest, which penetrated her liver and pancreas. Dalia was declared dead at around 12.00 PM in the hospital.

Heavily armed Israeli soldiers raided the Al-Jabiryyat neighborhood located on the outskirts of Jenin Refugee Camp, where Dalia lives, to re-arrest former Palestinian prisoner Khaled Suleiman. Ahmad, one of her relatives  and eye-witness to the murder, stated that “clashes erupted between hundreds of angry youth at the constant violent raiding of the refugee camp and the armed Israeli soldiers.” He added that “Israeli soldiers responded to the unarmed youth by hurling tear gas canisters to disperse them.”

Dalia is a mother of two young children. Dalia’s older kid is only two and a half years while the younger one is eight months old. She was awake during the clashes to prepare some milk for her baby child. Ahmad affirmed that “Dalia had to protect her children from the poisonous smell of tear gas. Holding her baby in her arms, she went to close the window.” Yet, Dalia was never able to close the window. An Israeli soldier with his finger on the trigger of the rifle was faster than Dalia when he hit her with a bullet that penetrated her chest. Ahmad further commented that “Dalia and her baby fell on the floor. Later on, lying on the floor, Dalia’s baby was surrounded by and tarnished with his mother’s blood.”

An ambulance was immediately called to the place in an attempt to save Dalia’s life. However, Palestinian Popular Struggle activist Omar Mansour, who is from Jenin, stated that “the Israeli soldiers started shooting at the ambulance and delayed its arrival at Dalia’s house while she was bleeding. Due to the Israeli soldiers’ violence against the ambulance, Dalia was taken to hospital late.”

Basem, Dalia’s husband and the rest of her family are in a state of shock following the brutal murder of Dalia. Ahmad said that “when the doctors in the hospital pronounced Dalia dead, her husband could not believe it. He started pleading with the doctors: “She is not dead. Daila is sleeping, please wake her up.” Basem, Ahmad said, “was given an injection to calm down as he was in an uncontrollable situation after the death of Dalia.” 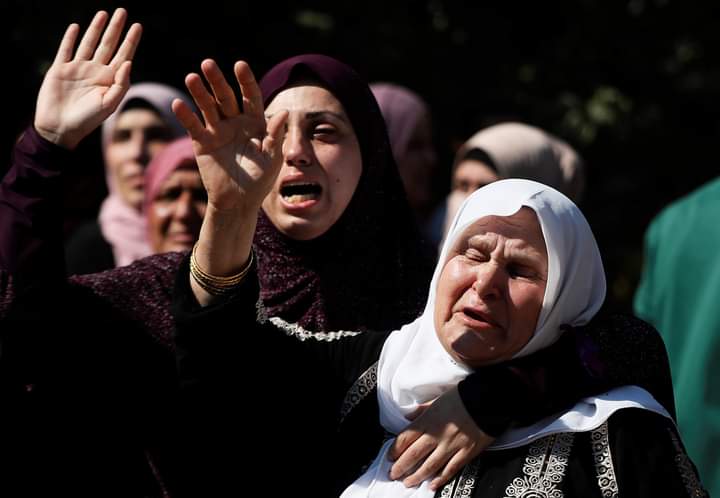 Dalia’s family saying their farewells to her for the last time.

Commenting on the murder of Dalia in cold blood, Ahmad said that “Palestinians are deprived of safety even inside their houses. Dalia was not one of those clashing with the soldiers outside. She was inside of her house when they murdered her.  All what she wanted to do was to protect her children from the smell of tear gas. The murder of Dalia represents a crime against humanity.”

Mansour emphasized that “almost every night armed Israeli soldiers raid Jenin Refugee Camp. Sometimes they arrest one person while in other times they arrest about a dozen people.” Mansour pointed out that “although Jenin Refugee Camp falls within Area ‘A’ (under the Palestinian Authority’s full security and civil control), this fact does not deter the Israeli occupation from raiding it to arrest or to kill Palestinians.” He also concluded, “We Palestinians have no sovereignty over any part of our land, be it the so-called Area ‘A’, ‘B’ (Under Mixed Control) or ‘C’ (Under full Israeli control).”

Jenin Refugee Camp is inhabited by roughly seventeen thousand Palestinians. The residents of the camp have been living in it since they were expelled from their ancestral lands when Israel was created in 1948. Since then, the number of the population has been increasing on the same size of land, one square kilometers. The fact that Jenin Refugee Camp is tremendously overcrowded does not stop the Israeli occupation forces from hurling tear gas canisters and shooting live bullets whenever they raid the camp. For Mansour, “any fired bullet by the occupation forces can murder any Palestinian either outside or inside their houses even if it is being fired ‘randomly.’” He asserted that “we do not know if the murder of Dalia was intentional or not, but the fact that the Israeli soldiers shoot live bullets while knowing how overcrowded Jenin Refugee Camp means that death of Palestinians can never be avoided.”

Since the beginning of 2020, the Israeli occupation has notoriously escalated its violence and arrest campaigns against Palestinians. The brutality of Israel’s apartheid regime comes as part of their attempt to implement the unilateral Israeli-American plan of de jure annexation of 33% of the West Bank known as the ‘Deal of the Century.” Mansour contended that “although the systematic murder and arrest of Palestinians have been taking place since the occupation of the West Bank in 1967 to realize its de facto annexation objectives of the West Bank on the ground, the recently escalated violence is part of the de jure annexation plan. Violence against us is meant to stifle our resistance to force us into living in ever-smaller enclaves while they annex large swathes of our land without allowing us, the owners of the annexed land to live in it.”