This Friday, once again, the people of the town of Ni'lin said prayers on their land near the apartheid Wall and during the Friday sermon the speaker stressed the need to stand by the prisoners and their demands, including an end to isolation confinement.

The protestors raised Palestinian flags and chanted against the apartheid Wall. The farmers vowed that neither this wall, nor the occupation and its criminal policies would be able to last for long. They further saluted the steadfastness of Palestinian prisoners in Israeli jails and praised Mahmoud Sarsak, the Palestinian football player who gained his liberatoin from Israeli jails only after a hunger strike of 92 days, that had rejected the invitation of Barcelona to attend the classic Barcelona – Madrid game together with Israeli occupation forces soldier Gilat Shalit.

As soon as the march arrived at the gate of the Wall, Israeli soldiers fired dozens of tear gas canisters at the citizens. Dozens of them suffered ffrom suffocation due to inhalation of this gas. The ensuing clashes between young participants in the march and the occupation forces continued for hours in the afternoon.

The coordinator of the Popular Campaign Against the Wall in Ramallah district Ahed Khawaja commented that this march was organized in solidarity with the prisoners and in support of the position of Mahmoud Sarsak and aims to achieve the dignity of all Palestinian prisoners in Israeli jails and outside.

In al Ma'sara, on Friday afternoon the weekly demonstration started with a gathering in the middle of village, from where the people intended to walk to their lands. however, the soldiers closed the entrance of the village to stop the people from reaching their land.

As in Ni'lin, the demonstration wanted to send a message to Barcelona football club denouncing the initiative to ask Israeli soldier Gilat Shalit and Palestinian football player Mahmoud Sarsak to watch together the classic football match there. They pointed at the fundamental difference between Mahmoud Sarsak who was arrested because he was struggling for peace, freedom and justice on the football field and Gilat Shalit, who entered Gaza to kill the people there as part of the occupation of Palestine. 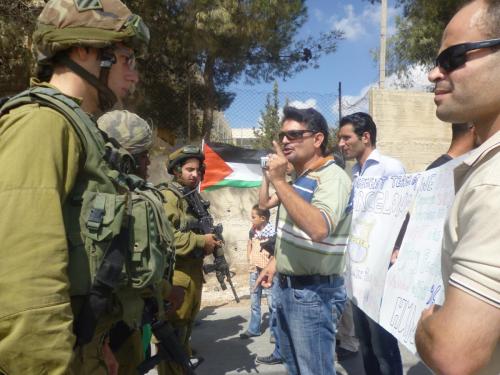 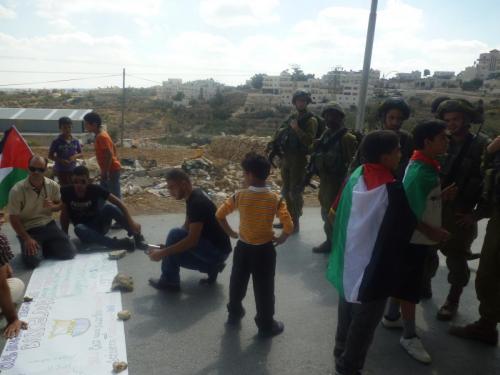 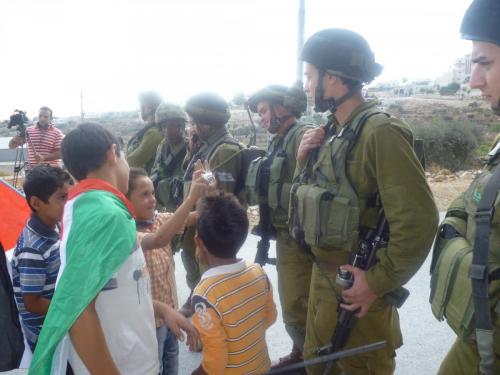