They live alone next to an Israeli settlement, in Qaryout village. After decades of settler attacks, they still refuse to move away. Although for years they could not sleep all at the same time: at least one member of the family had to remain awake, in case the settlers came to attack them with stones, guns and iron bars.

The Palestinian farmer that is surrounded by settlemets.

Prohibited construction on their own land

Qaryut is a Palestinian village of nearly 2,500 people, according to the Palestinian Central Bureau of Statistics, located in the northern West Bank, 28 kilometers southeast of Nablus. In the past decades, Israeli settlements have been built all around it, a fate Qaryut shares with many other villages in the West Bank. Lately, they settlements around the village have grown even bigger: one of them has watchdogs every 100 meters, security cameras and 24h-SUV patrols. While the settlements expand, Palestinians are largely prohibited construction even on their own land. The Palestinian man on the picture tried to build a new house, but the settlers demolished it before it was even finished.

They control the whole area

The settlers expand their control even beyond the fencings of their colonies effectively barring access to the Palestinian farmers to much more of their land than what is officially declared.

“We cannot go even 30 meters away from this house in the settlement’s direction The settlers would come immediately, attack the fields, cut the trees and destroy the cars… People here are always in a tense situation”. 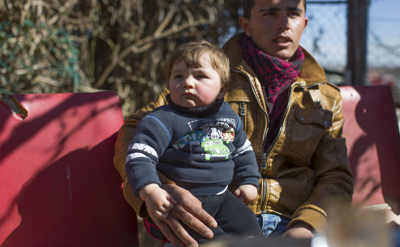 They built a fence on his land

Last month the settlers built a fence in the crops of the farmers of Qaryut during the night, reducing access to land even more. In the morning, the Palestinian farmer that lives next to the settlement, got into his tractor and started removing the fence.

“The settlers came and attacked me. Get out of the truck or we will shoot you, they said. But I replied: go on, shoot me!”.

The palestinian farmer continued destroying their fences. After one hour, the military came, and they told the settlers to retreat.

No settler was arrested or prosecuted.

UN does not recognize what is happening

The UN confirms the crimes committed by settlers in Qaryout, mentioning:

“Blocked access to land, destruction/damage of trees and crops, harassment and intimidation, physical attack against persons and settlers trespassing/takeover of property”.

Everything is publicly available on the UN’s Vulnerability Profile Project. The problem is that, although all these facts are duly collected and displayed, the UN apparently does not recognize that what is happening on the ground is not an incidental ‘vulnerability’ of populations to unchangeable hazards but a concrete and systematic plan of ethnic cleansing of entire Palestinian communities by Israel, the occupying power, through a number of mechanisms that make life for the people unsustainable. Furthermore, Israel gives no sign of reverting its policies and neither the United Nations nor its members states show any signs to actually do something about it and to follow through on their legal obligation to act in order to stop grave violations of international law. 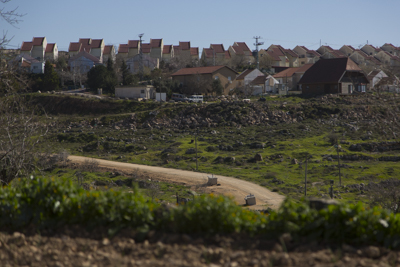 There are soldiers watching them from the cars and boxes with dogs inside.

As in the case above, although the military eventually stopped the settler attack, none of them was arrested or even tried in court, which means they can try again anytime soon – and next time, the soldiers may decide differently. In other words, the climate of full impunity has been upheld. Palestinian citizens cannot go to civil courts in this area – the only legal system here is Israel’s military courts, in which the conviction rate against Palestinians is as high as 99.7%, according to Addameer. 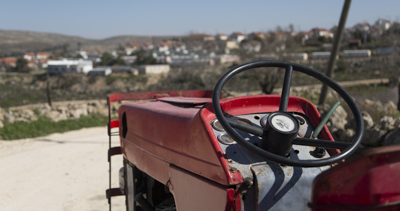 In the meanwhile, Qaryout residents continue to live in very dangerous and uncertain circumstances. It is a daily battle. Every day they come and confiscate a house. There are in total 29 houses, and all of them have orders of demolition, because they are in area C. The settlers are not the only problem: Israel’s military also makes life difficult.

“Israeli intelligence are investigating the children here – children that are 12, 13, 14 years old. They want to break this generation, they don’t want this generation to grow up with resistance. Many of the youth go away looking for work…”.

Another resident is straight-forward on his feelings about Israel:

“Each year they do more than the last. They don’t ever stop. Every village in Palestine is a small jail – this is the real situation of the Palestinian people. But those who remain in the village are determined to stay. They continue their resistance, go to the fields, they are not afraid”.

Watch how they controll the farmers land: 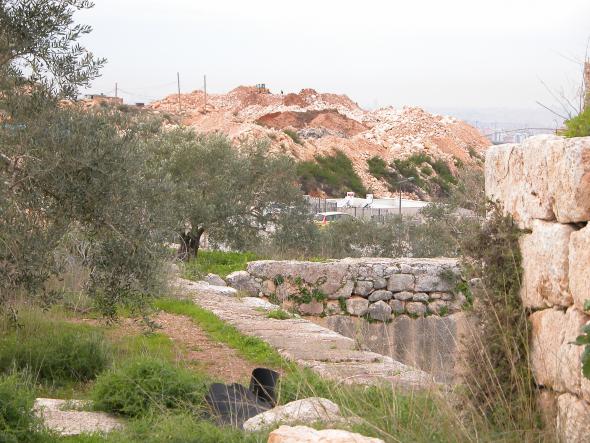 Expulsion of a People

We Will Build It Again, And Again

The Israeli soldiers have leveled the ground and demolished their camp eight times, but they refuse to give up. They are clear in their message: "When the soldiers leave, we will build it again". Watch the video      They rebuilt the camp  A big group of volunteers were gathered to help rebuilding the […]

Monday at 10 o`clock Israeli soldiers came and violently destroyed the demonstration camp at Abu Dis. Rubber bullets were shot, and tear gas, sound bombs and pepper spray was thrown at the unarmed civilians. Five people were arrested, and three were injured.  Watch the video here    Want to remove them from their land […]