The grassroots Palestinian Anti-Apartheid Wall Campaign and the BNC organized a documentary presentation about the Israeli apartheid regime in Hebron and Bethlehem cities.
Mohammad Basheer, youth activist in Stop the Wall campaign and the independent youth movement (Herak Shababi), said that the activities started there and will continue in Ramallah, Salfit, Tulkarem, Tobas, Nablus added to the weekly protests in the west bank.
Mazen al Azzeh, the coordinator of Stop the Wall Committee in Bethlehem, called to stop the crimes and shellings in Gaza against which caused until now 22 martyrs. He added that without boycotts, divestments and sanctions against Israel, this apartheid regime will continue its bloody crimes against the Palestinian people. 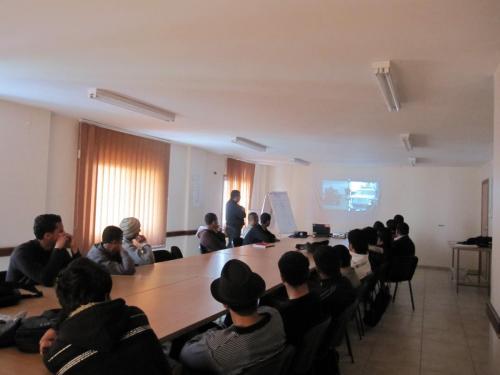 The occupation bulldozers razed vast areas of agriculture land today March 22 in Al-Khader village, south of Bethlehem. According to the coordinator of the popular committee of Stop the Wall, Ahmed Salah, the land owner Khalil Abdbul-Rahman was surprised when he entered his farm near the settlement of ‘Daniel’, which the occupation built on the […]

Ni’lin: Israeli soldiers repressed the weekly popular march in Ni’lin, west Ramallah, as they threw dozens of tear gas bombs. This Friday’s march in Ni’ilin was part of the mobilization efforts for the global mobilizing effort “Israeli Apartheid Week”  and was entitled “Racism of Israel” as people of the village repeated slogans criticizing the Israeli […]